The Spirit of Campbeltown Re-Opens its Doors 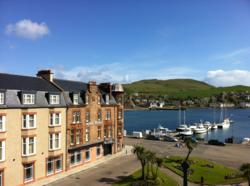 “The Royal holds a special place in Campbeltown history...it serves as a celebrated icon where families once celebrated grand occasions. For us, it begins another chapter in our pursuit to make Campbeltown and Machrihanish a world-class destination.”

The Village at Machrihanish Dunes officially re-opened the historic Royal Hotel in Campbeltown on Saturday, 12 May 2012. David Southworth and Joe Deitch, owners of Machrihanish Dunes, were on hand to open the doors of this landmark hotel with a private reception followed by a grand fireworks display over Campbeltown Harbour for the community to celebrate!

Built in 1907 by local proprietor Archibald Johnston, The Royal Hotel was designed by renowned architect James Monro of Glasgow, who would later design the Grand Hotel in St. Andrews. The Royal Hotel remained a focal point for many years to come, serving families and friends from all over Campbeltown and the Kintyre Peninsula as a mainstay for weddings, celebrations and its famed Sunday tea.

After years of economic difficulties in the area which led to a slow decline in business, the aging property eventually had to close its doors. In 2008, David Southworth and Joe Deitch purchased both The Ugadale and Royal Hotels, along with the Machrihanish Dunes Golf Course, and thus began the development of the Village at Machrihanish Dunes, which includes both hotels and the newly built Ugadale Golf Cottages.

“It’s important to both Joe and I to celebrate this momentous occasion with the community that supported us through a painstaking restoration process,” said David Southworth. “The Royal Hotel holds a special place in Campbeltown history. For many, it serves as a celebrated icon where families and friends once celebrated grand occasions. For us, it begins another chapter in our pursuit to make Campbeltown and Machrihanish a world-class destination.”

The New Royal Hotel
Today, The Royal Hotel makes the most of its unmatched waterfront location overlooking Campbeltown Harbour. Guests at The Royal enjoy unforgettable views of the harbour area, with its stone piers and scenic walkways. The hotel features all the contemporary conveniences and amenities you’d expect in a modern luxury accommodation, set in surroundings steeped in old-world elegance. With its 23 sumptuously appointed guest rooms, The Royal is also home to The Black Sheep Pub, named after its famous Hebridean sheep who graze and have graced the grounds of Machrihanish Dunes Golf Course since 2008; and the elegant Harbourview Grille, which is sure to become recognised as one of the finest dining establishments in all of Kintyre.

The Village
The Village at Machrihanish Dunes consists of the Machrihanish Dunes Golf Club (Top 100 Course in U.K. & Ireland by Golf World), The Ugadale Hotel, The Ugadale Cottages (Golf Tourism Scotland's "Small Hotel of the Year,” The Royal Hotel, The Kintyre Club, Serenity Spa, and The Old Clubhouse Pub. The recently opened Ugadale Hotel offers 22 luxurious guest rooms and suites, many overlooking the Atlantic and famed Machrihanish Golf Club. It features a restaurant and bar called The Kintyre Club, the full-service Serenity Spa and a Fitness Centre.

The Investment
In addition to bringing valuable jobs to the area, Southworth has invested over £ 19.3 Million ($30 Million US) to the overall project, along with grants from Highlands and Islands Enterprise (HIE) totalling £2.2million, including £886,000 from the European Regional Development Fund (ERDF) funding support. In addition, HIE provided a grant totalling £ 509,606 for the development of the Machrihanish Dunes Golf Course which opened in 2009. A special grant was also awarded to the Royal Hotel by the Scottish Ministers, through Historic Scotland under the Historic Environment Regeneration Fund and the Campbeltown Town Centre Regeneration Project (Argyll & Bute Council)

Douglas Cowan, Highlands & Islands Enterprise Area Manager for Argyll & the Islands, added: “The opening of the fully restored Ugadale Hotel and Royal Hotel marks the completion of the latest phase of investment by Southworth, building on the success of the internationally acclaimed Machrihanish Dunes golf course. The development is playing a key role in repositioning the local economy providing a high quality tourism product to attract new, high spending visitors from around the world. HIE approved £2.2million, including £886,000 from the European Regional Development Fund, to support the redevelopment of the Ugadale and Royal hotels as part of our commitment to the revival of the Kintyre economy, bringing more than £3million to the economy annually. The commitment and investment by Southworth Europe is having a major impact on both the economy and confidence on the Kintyre peninsula and the opening of the Ugadale hotel marks a significant step forward for the area.”

Editors Note:
Grants to the restoration of the Ugadale Hotel in Machrihanish and The Royal Hotel in Campbeltown in cooperation with: Highland and Islands Enterprise (HIE) and the European Regional Development Fund (ERDF) funding support; the Campbeltown Town Centre Regeneration Project (Argyll & Bute Council), a special grant to the Royal Hotel by the Scottish Ministers, through Historic Scotland under the Historic Environment Regeneration Fund.