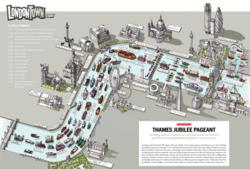 On Sunday 3rd June 2012 The Queen will travel in a flotilla of up to one thousand boats from the UK, the Commonwealth and around the World for the Thames Diamond Jubilee Pageant, an event which promises to be one of the major focal points of the celebrations held on the Jubilee Bank Holiday weekend.

Measuring seven and a half miles from end to end, the flotilla will be the largest fleet of ships assembled on the River Thames in 350 years, continuing a royal tradition that dates back to 1533 when Anne Boleyn travelled by boat for her coronation.

Millions of people are expected to line the banks of the Thames to witness the carefully choreographed pageant which will blend history and modernity with a diverse mix of rowing boats, skiffs, sailing ships, narrow boats, steamers, wooden launches, barges, motor boats, canoes and kayaks all wonderfully decorated for the occasion.

Visitors wishing to plan their day out should consult the comprehensive guide to the Pageant on LondonTown.com which offers a unique illustrated Thames Jubilee Pageant Map, full timing and bridge/road closure details, top viewing tips and information about the boats, their history and their crews. (You can also use the Pageant map on your own website)

Boats to look out for include the Marisa Cristiano – a gondola made in Venice in 1985 and owned by a restaurant whose waiters were taught to row by the gondolier in the famous Cornetto advert of 25 years ago; Orca – a Celtic longboat carrying Henry VII and rowed by 15th-century maidens; the Silver Darling – a luxurious Sunseeker with a Damien Hirst artwork on board; and the Silver Queen – once described the "most beautiful boat on the Thames".

A floating belfry (the first of its kind ever to be on mounted on the river) holding the eight Royal Jubilee Bells named after the royals will herald the start of the Pageant while Symphony – a vessel carrying the London Philharmonic Orchestra – will bring up the rear. But the centre of attention will be the resplendent Spirit of Chartwell, which will carry The Queen and senior members of the Royal Family, accompanied by music from Belfry Barge, whose peals will be answered by local churches.

There will be 10 further musical barges, with an orchestra playing James Bond themes as it passes the MI6 building. 47 tall ships, yachts, Thames barges and historic craft will be moored along both banks of the Thames around Tower Bridge to form an "Avenue of Sail" made up of sailing craft too large to pass under the bridge – including the imposing Tenacious, a beautiful sailing vessel launched in 2000, and the Boadicea, a traditional oyster smack and one of the oldest sailing boats in Europe.

Thames piers, riverside roads and bridges will be closed to traffic and there will be around 40 big screens along the official route - which runs from Battersea to Tower Bridge - so members of the public can enjoy the pageant from a variety of vantage points.

The Thames Diamond Jubilee Pageant starts at Albert Bridge between Battersea and Chelsea at 2.40pm but vessel mustering will take place from midday between Putney Bridge and Wandsworth Bridge. The Queen is scheduled to pass under Tower Bridge at 4.30pm before disembarking at Presidents Quay near to the entrance of St Katherine's Docks, from where she will review the passing pageant.

The last vessel in the flotilla, The Symphony (carrying the London Philharmonic Orchestra on board), will pass under Tower Bridge at around 5.30pm. Although the official route comes to an end at Tower Bridge, the majority of the boats will continue on towards Greenwich – offering the public in south-east London further chances to view the spectacle.

More than a million people are expected to line the Thames and view the spectacle – but visitors should be warned that the majority of bridges will be closed to traffic and the public both in the build-up to the Pageant and during the passing of the flotilla. To plan your day out please visit LondonTown.com's comprehensive article on the Thames Diamond Jubilee Pageant.

About LondonTown.com
Londontown.com is the number one Internet site for London serving over 1.6 million customers each month.. With over 17 years of experience assisting visitors to the capital, they pride themselves on their customer service and editorial independence – no advertising or paid for content is allowed. The LondonTown.com team assist in finding cheap London hotels, sightseeing tours, ticket information and events. Trusted and with a loyal following, LondonTown.com is a very reliable source of recommendations and advise on what to do in London. http://www.LondonTown.com