STRINGS, directed by Mark Dennis and Ben Foster, is now available to rent or own exclusively on iTunes. 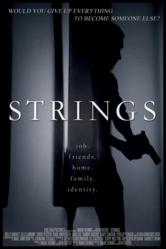 The Official Poster for STRINGS

Strings, after premiering at the Breckenridge Festival of Film last June, toured the country to over a dozen festivals including the Austin Film Festival and the Hollywood Film Festival. During its run, the film garnered awards including Best Thriller at Route 66 Film Fest, Best Director at Tulsa Int'l Film Fest, and Best Feature Film at the SOHO International Film Festival in NYC.

Strings was directed by the University of Texas filmmaking duo, Mark Dennis and Ben Foster and Stars Billy Harvey and Elle Lamont. The film was shot in Texas, although the story takes place on the east coast. Annette Kellerman of Ain't It Cool News described the film as "a wholly unique story that resembles nothing I can recall". Others have compared it to the work of Christopher Nolan.

Look for a small theatrical and U.S. retail release of Strings in October and as distribution negotiations continue, potentially a wider theatrical run in Southeast Asia.

About Strings:
Strings tells the story of a troubled musician who seeks out an experimental therapy which calls for him to leave everything behind and take on a new identity. The musician soon realizes his new life isn't what it seems and his therapist is using patients to commit vigilante crimes.
http://www.stringsmovie.com