Four-day bike ride from Charlotte, NC to Washington, DC culminated with a candlelight vigil, during which 362 names of fallen police officers were added to the National Law Enforcement Officers Memorial. 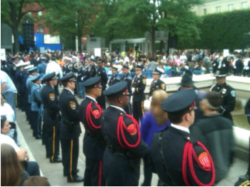 It was obvious that we were all focused on the same goal: reach D.C. in one piece to honor the too-many fallen police heroes and, in particular, Fred Thornton of the Charlotte-Mecklenburg Police Department.

From May 9 to 12, Glenn Burrell, President of Sunstates Security, joined 65 members of the Charlotte-Mecklenburg Police Department (CMPD) in a 532-mile bike ride to honor police officers who gave their lives in the line of duty. This year’s ride was dedicated to CMPD Officer Fred Thornton, who fell on February 25, 2011. Officer Thornton's name was added to the National Law Enforcement Officers Memorial in Washington, D.C., during a candlelight vigil on the evening of May 13.

All along the route, from Charlotte, N.C., to Washington, D.C., fellow officers and citizens joined the riders to show support for their cause. Each challenging mile, including a 95-mile stretch in torrential rains, honored those who made the ultimate sacrifice. Participants raised more than $43,000 to benefit Charlotte's Finest Legacy Foundation, a 501(c)(3) non-profit that provides scholarships to students planning law enforcement careers. The foundation was created to honor CMPD officers Sean Clark and Jeff Shelton, both killed in the line of duty on April 1, 2007.

Burrell estimates that he spent more than 32 hours on his Trek bicycle during the four-day ride.

“During that time, I spoke with many of my fellow riders, most of whom were active police officers,” he said. “It was obvious that we were all focused on the same goal: reach D.C. in one piece to honor the too-many fallen police heroes and, in particular, Fred Thornton of the Charlotte-Mecklenburg Police Department.

“The camaraderie and common goal was an experience not to miss, and I made many new friends along the way.”

Burrell described the candlelight vigil at the National Law Enforcement Officers Memorial as a particularly moving experience. Last year, 163 officers lost their lives in the line of duty. Their families were brought in by bus from across the country and then personally escorted by police officers to their seats for the 24th annual ceremony, which was attended by approximately 20,000 people. In addition to the fallen officers of 2011, the names of another 199 officers, whose deaths had been lost to history until this year, were added to the memorial.

About Sunstates Security
Based in Raleigh, N.C., Sunstates Security provides uniformed security personnel and security consulting services to clients throughout the Southeast, as well as in the Northeast and Southwest. The company is certified as a Women's Business Enterprise by the Greater Business Women's Council, a regional certifying partner of the Women's Business Enterprise National Council (WBENC).