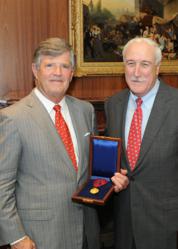 A life-long champion of leveraging advanced technologies and delivering complex aerospace systems to the U.S. warfighter, Mr. Crosby’s leadership and commitment were instrumental in the development and fielding of the B-2 “Stealth” Bomber program.

NDIA’s Forrestal Award is named in honor of James Forrestal, former Secretary of the Navy and the first U.S. Secretary of Defense, and is bestowed annually on a defense industry executive who best exemplifies Secretary Forrestal’s support for a strong industrial base.

Mr. Crosby is a graduate of the U.S. Military Academy at West Point. He served his country in uniform in Germany and Vietnam, culminating a distinguished military career as Military Staff Assistant to the Vice President of the United States.

Throughout his follow-on career in the defense industry, Mr. Crosby labored tirelessly to deepen the transatlantic industrial ties that bind the United States to its most important global partners. His unique contributions in this area had a lasting impact on the U.S. and its allied defense industrial bases and the military services they support.

A life-long champion of leveraging advanced technologies and delivering complex aerospace systems to the U.S. warfighter, Mr. Crosby’s leadership and commitment were instrumental in the development and fielding of the B-2 “Stealth” Bomber program and other high technology weapon systems operating today on the modern battlefield. At the time of his retirement from Northrop Grumman Corporation, his responsibilities included five ongoing major prime aircraft programs: B-2, Joint STARS, E-2C, EA-6B and Global Hawk; as well as major roles on F-18 and F-35.

During his tenure as Chairman and CEO of EADS North America, Mr. Crosby guided EADS to its first competitive award as a prime contractor to the U.S. Department of Defense, resulting in the establishment of new manufacturing, engineering and support facilities in Mississippi and Alabama, adding diversity and strength to the U.S. defense industrial base. Mr. Crosby retired from his position as Chairman of EADS, North America earlier this year.