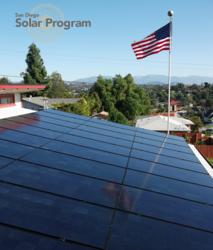 Two months ago, San Diego’s top residential solar integrator, Sullivan Solar Power, announced its role in running a countywide solar incentive program to assist the region in meeting its renewable energy goals. The San Diego Solar Program allows eligible homeowners to go solar for no upfront cost and receive a substantial cash payment for their involvement. The program successfully closed the first phase of the program Thursday, with 500,000 Watts of solar power to be deployed as a result of the initiative.

“The San Diego Solar Program has been extremely successful in assisting homeowners that might otherwise be on the fence about solar to make the leap and transition to generating clean electricity,” said Daniel Sullivan, founder and president of Sullivan Solar Power, “The immediate financial savings plus the guaranteed cash-back payments make going solar a no-brainer.”

The program provides participants financing to cover the cost of the solar power systems and cash payments to the participant once a participant's system is installed. According to Sullivan, a typical homeowner with a electric bill of $200 can get the same electricity from solar for $120 and not spend a dime out-of-pocket. On Thursday, the second phase level of incentives opened, where homeowners can receive $0.30/Watt for their solar projects, up to $1500 after the project is completed.

Sullivan Solar Power expects the second phase of the San Diego Solar Program to be exhausted within as little as 2 months as community outreach efforts for the program have increased for the summer. The second phase is limited to 1,000,000 watts of solar capacity or about 150 to 200 homes.

Additional information on the program can be found by visiting http://www.sandiegosolarprogram.org or by calling 1-800-SULLIVAN.

About Sullivan Solar Power
Sullivan Solar Power is headquartered out of San Diego, CA and owned and operated by Daniel Sullivan. Sullivan Solar Power is a turnkey solar system provider that services all of Southern California and delivers projects from concept to completion. The company has installed over 9,000,000 watts of solar power ranging from small-scale residential to large-scale commercial and municipal systems. According to California Solar Initiative data, Sullivan Solar Power has installed more residential solar power systems than any other company in San Diego County. Regardless of project size and scope, Sullivan is committed to delivering the best products and the most qualified professionals to its customers. Visit http://www.sullivansolarpower.com for more information.