Author Shares His Struggle for Acceptance in an Autobiography 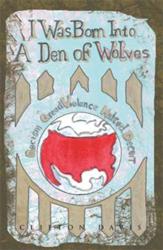 As Huey Newton used to say, there are only two evils to fight in the modern world: racism and capitalism. Clifton Davis writes about his life as a minority amidst a nation obsessed with material possessions, violence, greed, racism, hatred and deceit in I Was Born Into A Den of Wolves.

As an autobiographical work, Davis writes about how the proverbial “American Dream” has blinded its citizens to the immoral and shameful acts committed almost every day. For Davis, these acts remain unnoticed as most writers of American history neglect to accent these dreadful deeds, avoiding the real truth of what actually happened. The author also points out that the nation puts more emphasis on the victorious events of what is said that their forefathers accomplished–colonizing a conquered land, victimizing its natives, and denying the rights of human beings to be free.

“My inspiration to write ’I Was Born Into A Den Of Wolves’ became clearer as I grew older and became knowledgeable in the ideology of hatred and racism that exist in the American society. There are those who say even today that race relations are better today than it was years ago. This is true to some degree but the hidden deceit of hatred that still exist in our society leaves no doubt that racism is still alive in America. It is like a fiery emblem under a bed of smoldering ash that rekindles itself from day to day and year to year,” the author shares.

Heartwarming and certainly an eye opener for readers, I Was Born Into A Den of Wolves puts into perspective the sentiments of a minority born in a time when balance, greed, racism, hatred and deceit were accepted by the American Government.

About the Author
Clifton Davis served 23 years in the United States Air Force. He served a tour in Korea from 1953 to 1955. He was honorably retired from the air force February 4, 1973 and continued working in the career of which he was during his time in the service.