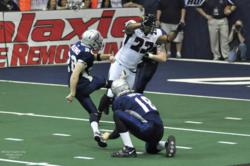 Mike Salerno From Next Step Kicking

We were honored to be asked by Michael Husted to join NCS. This is a great accomplishment in the short time that we have been coaching as Next Step Kicking. Darren Monnett

Husted, who kicked in the NFL for nine years and founded the National Camp Series, says he is happy to have Next Step Kicking as a new NCS Associate.

“NCS Associates are some of the best kicking coaches in the country,” says Husted. “NCS coaches provide the highest quality instruction to high school kicking specialists around the country. Having Next Step Kicking as a NCS Associate will just continue this tradition.”

"Having Next Step Kicking join our network accomplishes two very important goals for the NCS," says Husted. "First, it continues to deepen our wealth of expert kicking coaches across the country with the addition of Darren Monnett and Mike Salerno. Second, it expands our network into an area known for excellent kickers, punters and long snappers while providing the Chicago area with two local kicking resources."

Next Step Kicking Origination was created by Darren Monnett and Mike Salerno.

Darren Monnett and Mike Salerno have been working together since 2003. Darren was helping train Mike as a junior in High School where a soccer ball was the only ball he had kicked at the time. Through high school, college, and the professional level Darren has been the go to guy for Salerno.

They started coaching local talent which led to them sending four kickers to Div. I schools in three years. That led them to launching Next Step Kicking in June 2011, where their goal is to, “Train kickers of all ages to take the Next Step in reaching future kicking goals.”

Monnett and Salerno both agree they are looking forward to working with Husted and other NCS coaches in the NCS 2012 season.

"Next Step Kicking is proud to join the National Camp Series as a NCS Associate," says Monnett. "We were honored to be asked by Michael Husted to join NCS. This is a great accomplishment in the short time that we have been coaching as Next Step Kicking."

Salerno adds, "One look at the coaches around the country that have joined Michael Husted and the National Camp Series made it clear to us that we would be joining an elite group of coaches. It was clear to us this would be our next step to building our program to a competitive level statewide and nationally."

Michael Husted, who created the National Camp Series (NCS) after kicking in the NFL for 9 years, says he is excited about the NCS season starting again so soon after a very successful NCS Super Camp in Orlando, Florida in February.

By sorting through six years of historical event data, the KIX system determines a kicker’s rankings by cross-referencing player data to determine how the athletes stack up against others, both presently and historically.

Click here for more about the National Camp Series.