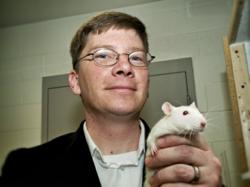 "This is something that could drop out of the sky and give you everything you need to train rodents to sniff out land mines."
-- Kevin Myers, Bucknell University

Since the invention of land mines some seven centuries ago, activists, researchers and government officials have tried to root out the indiscriminant and deadly weapons with everything from metal detectors and robots to dogs, bees and rats.

The methods have, however, proved dangerous, labor-intensive and time-consuming.

Two Bucknell University professors are working with a U.S. Department of Defense contractor to develop faster and more sophisticated technology and methods to detect land mines. The team has devised a system to train rats to recognize and respond to the explosives, using materials that can be delivered anywhere with instructions that anyone can use.

"This is something that could drop out of the sky and give you everything you need to train rodents to sniff out land mines, even if the people who are using it can’t read or write," said Kevin Myers, an associate professor of psychology who studies learning, memory and motivation as it relates to appetite and food preferences in rats.

Myers and Joe Tranquillo, associate professor of biomedical and electrical engineering, are working with Coherent Technical Services Inc. (CTSI). The U.S. Army Research Office has awarded the company and Bucknell $100,000 for Phase I of the project. Such contracts are designated for small businesses and academic research partnerships that address real problems with marketable technology.

Land mines are especially dangerous because they are often buried then lay concealed for years. The International Campaign to Ban Landmines describes land mines as indiscriminate weapons that kill and injure thousands of people each year, instilling fear and serving as a barrier to development.

The project is an "innovative yet low-tech solution" to address a problem in developing areas of the world, Myers said. The big advantage to training rats rather than larger animals is that the rats are small and light and do not trip the land mines, which can remain dangerous for years after they are installed.

"Some people think we are sending off rats to blow up mines, and that's absolutely not the case," Myers said.

In his lab at Bucknell, Myers is training rats to respond to the scent of land mines by doing a simple task: turning in circles.

"The process is similar to how bomb-sniffing dogs are trained," he said. "There is a distinctive odor from the explosive in land mines, which diffuses in the soil. We have to train rats to recognize that. Rats' olfactory sensitivity is orders of magnitude higher than that of humans. We need to train the rats to regard that odor as significant by associating it with a food reward."

The project is a combination of psychology, animal behavior and engineering, Myers said.

"I think about how animal perception, memory and behavior fit into the problem, but the task is to design apparatus and a procedure to do this more efficiently," he said. "How do you design a Skinner box so it can be used by someone who doesn't speak English, or doesn't have academic training in behavioral psychology? How do you make it rugged so you can drop it out of a plane?"

To answer those questions, Myers asked Tranquillo to collaborate with him on the project.

Tranquillo is working with student Matt Young Jr. in the University's new Richard J. Mooney Innovative Design Laboratory to develop the electrical, mechanical and thermal technology and software for the project. Graphic illustrations will provide users with step-by-step instructions on how to train and work with the rats in areas where land mines are present.

"It's a complicated problem," Tranquillo said. "The project involved devising a way to monitor and track how the rat is performing as well as developing an icon-based laptop to guide people who have little experience with technology or animal training," Tranquillo said.

The rats will be outfitted with miniature backpacks and wireless transmitters that track their positions and movements. During the first part of their training, the rats learn to associate a mild buzz in the backpack – much like the "vibrate" setting in a cell phone – with getting a food reward. Eventually, the buzz itself acts as a reward that may be triggered when the rats complete certain tasks.

In the next phase of training, the rats are prompted to sniff various odors and are rewarded for doing something specific in response, such as turning to the left rather than the right, when the land mine odor is present. Eventually, the rats learn to behave more distinctively when they detect that odor.

"Because the rat associates the buzzer with food, you can use it to reward the rat for initiating some kind of action," Myers said. "We chose to teach them to turn in circles because that is not something they would do spontaneously. And it's easy to detect when they're doing it with a couple of motion sensors in the backpack."

The wireless transmitter also enables the trainers to communicate with the rats in the field,

Tranquillo said. "We'll be able to constantly track the rat's location as it sniffs around a field and take note where the rat starts circling to tell us it smells a mine."

If the project is successful, the contract could be extended for two years with an award of up to $750,000. In Phase II, the Army would provide support for recruiting private investors for the final phase, product development.