A United Nations delegation visited the Banasa's food security project in order to join efforts to develop local projects to contribute to attain the Millennium Development Goals, especially the one aiming at reducing infant mortality and improving maternal health. 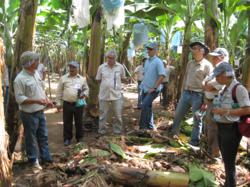 This is a first step in this alliance between the private sector and the United Nations, which we believe has ample potential for growth.

The study conducted in September, 2011 by the University of Colorado, Health and Human Development Needs in Guatemala’s Southwestern “trifinio,” revealed that two thirds of mothers in the region suffer from moderate or severe food insecurity, which is reflected in the high mortality rates of their infant children.

Recently a United Nations delegation visited a project site established by Banasa in the “trifinio” area of Guatemala to address this problem, which contributes to attain the Millennium Development Goals, especially the one aiming at reducing infant mortality and improving maternal health.

“This is a first step in this alliance between the private sector and the United Nations, which we believe has ample potential for growth,” said Ernesto Sinópolis, head of the UN Food and Agriculture Organization (FAO) in Guatemala. “The effort and interest of the private sector to reduce the high malnutrition rates of the poorest communities is important,” said the communications analyst of the Office of the United Nations Resident Coordinator in Guatemala.

Bernardo Roehrs, Banasa’s Corporate Director, thanked the UN for the site visit and expressed his satisfaction with the company’s contribution to improving mother and child health. “Our commitment goes beyond what international conventions dictate, and we are convinced that with good public policies and working in partnership with the United Nations and civil society, we can change for the better the situation of families in this region,” said Roehrs.

The visit to Banasa by UN officials included a tour of a banana packing plant, the Fernando Bolaños private school where the children of company workers attend school, as well as the community of Chiquirines, in Ocós, San Marcos province, where they met community leaders and participating mothers of Banasa’s food security program Happy Families.

While in Chiquirines the group witnessed a training targeting mothers of the Happy Families program, and met with the Asociación del Trifinio Suroccidental, representing 15 communities from the surrounding area. In this meeting several of Banasa’s corporate social responsibility programs to assist communities in the areas of health, education and disaster preparedness were discussed.

The point where the three southwestern provinces of San Marcos, Retalhuleu and Quetzaltenango converge (the “trifinio”) is an area traditionally neglected by the government, lacking in basic services and education, all of which have had a negative effect in the population’s food security. The area has a 42% prevalence of diarrhea and 58% of children suffer from respiratory diseases.

This region is in dire need of government attention, with community development projects targeting more than 23,000 people who live in about 20 communities (4,406 households) around the “trifnio.” In this region the illiteracy rate reaches 26%, only 27% of the population has access to drinking water, while only 1% has indoor plumbing.

The visit by UN officials is expected to bring to concretion a joint program which unifies the efforts and capacities of the private sector, international organizations, civil society, government and communities. With this in mind we call on the municipal and central governments to join our efforts to improve the human development indices of the population of the region (0.45 is the municipal average, while national one is 0.7).

About BANASA:
BANASA is one of the largest agribusiness in Guatemala, where it has over 3,500 direct and 10,000 indirect employees who contribute every day to the socioeconomic development of the country and the region.
Read more: http://www.banasa.net/eng/about_banasa.php