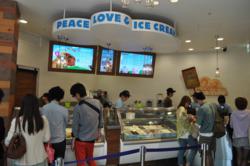 The digital menu boards in the Tokyo store – in both Japanese and English – mark the first time Ben & Jerry’s has used digital signage in any of its worldwide locations. The signage presents a bold, vibrant way to inform customers on what’s available from the delicious options of super-premium ice cream, ice cream cake, shakes, sundaes and cafe chillers, while enabling the store to change or promote items, quickly and easily. The Twitter Ticker allows the store to drive more positive engagement with customers via social media.

“Scala was an ideal choice because its software provides a flexible solution that met all our needs – digital menu boards, social chatter and standalone video,” said Shintaro Nakagawa, Ben & Jerry’s brand manager. “Having digital signage provides a new, cool way for us to connect with customers and helps us build on creating a memorable experience they cannot get anywhere else.”

“The Scala team in the U.S. and Japan were instrumental in translating the technology for Tesser’s digital signage and live Twitter and Facebook feed concepts into layman’s terms, making the digital communication easy to incorporate into the store design,” said B. Todi, account manager, Tesser. “Scala software is so powerful and flexible there were no limits on the creativity that we could apply to our design concepts.”

According to Oliver Vagner, principal architect, Solution Forge, LLC, “Scala Designer capabilities provided a fast, flexible solution that helped us create animated, dynamic content for an attention-grabbing experience. The stability and interoperability of Scala software allowed us to quickly generate confidence that the system would deliver the reliability needed in a store environment.”

Driving more than 500,000 screens worldwide, Scala Inc. is a leading global provider of digital signage and advertising management solutions. Scala is the world’s first connected signage company, offering the leading platforms for content creation, management and distribution in digital signage networks and the first unified platform for advertising management of both traditional and digital signage networks. Scala is headquartered near Philadelphia, Pa., and has subsidiaries in Canada, The Netherlands, France, Norway, Germany, Japan and India, as well as more than 500 partners in more than 90 countries. For more information, visit: http://www.scala.com/ or their blog. Connect with Scala via Twitter, Facebook and LinkedIn.