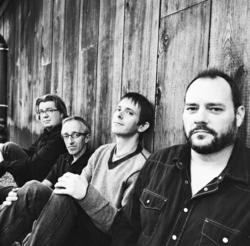 Named in honor of a sketch by the Monty Python comedy troupe, this 4-piece band of Santa Barbara, CA high school cronies came to be known as Toad the Wet Sprocket in 1986. To this day, their melodic folk-pop sound made them one of the most successful alternative rock bands of the early 1990s.

Singer Glen Phillips, guitarist Todd Nichols, bassist Dean Dinning, and drummer Randy Guss spent time honing their skills in area bars. Then, in 1988, they entered a nearby studio and came out with their debut LP, Bread and Circus. Recorded in just 8 days and for a cost of $650, this inaugural recording was originally sold in Santa Barbara area record stores as a home- made cassette. While the band was recording their second album, Pale (16 days & $6,000) they caught the attention of the LA offices of Columbia Records. After agreeing to the band’s request to reissue Bread and Circus only in its original form — without any alterations or remixes – Columbia Records signed Toad the Wet Sprocket.

Then in 1991, Toad the Wet Sprocket’s commercial breakthrough came as the single “All I Want” (which had nearly been left off the 1991 album Fear) became a Top 20 hit. Gavin’s airplay reports also listed it as number one. After “Fear” was certified platinum, another single from the LP, “Walk on the Ocean,” also became a successful track for the band. They played over 300 shows on the Fear tour, a two-year marathon ending in throat surgery for Phillips’ overused pipes.

Three years later, Toad returned with Dulcinea, generating yet another Top 40 hit (not to mention a six week run as number one on Billboard’s Modern Rock Tracks) with the single “Fall Down.” Dulcinea then also sold enough copies to reward Toad with another platinum certification.

Coil, Toad the Wet Sprocket’s fifth proper LP, followed in 1997. Then in July, 1998, the group parted ways. Even so, in 1999, PS (A Toad Retrospective) was released. In 2004, Columbia/Legacy released Toad’s live CD Welcome Home, Live from the Arlington Theater.

Since 2006, the band has played to enthusiastic crowds of all ages across the country, proving that great music truly is timeless.