Edward M. Arnett ably leads the reader into the road less taken for those who lived through the Second World War 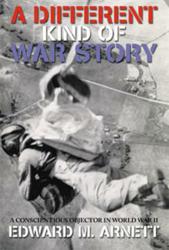 Much has been said and written about the most pivotal battle fought in the annals of twentieth century’s history. For the United States of America, the Second World War could be dubbed as the Good War in the years that followed, as the nation stumbled from one increasingly dubious and unpopular military engagement to another—Korea, Viet Nam, Iraq and Afghanistan. In A Different Kind of War Story, author Edward M. Arnett wields his excellent narrative skills and chronicles a less familiar World War II story from the viewpoint of the twelve thousand conscientious objectors who refused to join the military.

Arnett narrates the story of those who refused to join the military and drafted to do “work of national importance” under Selective Service in a variety of Civilian Public Service (CPS) camps and special projects. Of those who refused to join the war effort, the largest groups came from the three historical peace churches—Mennonite, Brethren, and the Religious Society of Friends (Quakers)—who have stood stolidly against participation in war ever since their establishment in the Anabaptist movement during the sixteenth and seventeenth centuries, which attempted to follow the precepts of simplicity and pacifism that they believed typified the early Christian church.

A Different Kind of War Story takes readers to Arnett’s experiences as a draftee in the World War II Civilian Public Service – from parachuting into remote areas of the Rockies to put out forest fires as part of the Forest Service Smoke jumper unit to assisting in the transfer of 1, 200 wild horses on a cargo ship to Poland as aid for reestablishing Polish agriculture. Observations on Poland under the Soviet occupation during the early years of the Cold War are also reflected in the later chapters.

With his ability to relay richly-detailed stories, Arnett ably leads the reader into the road less taken for those who lived through the Second World War in A Different Kind of War Story.

About the Author
Edward M. Arnett was born in Philadelphia in 1922 .He grew up in the Quaker pacifist environment and served as a conscientious objector during the Second World War on projects described in this book . From the age of ten, Arnett cultivated an interest in chemistry and spent most of his life as a teacher and research scientist at the University of Pittsburgh and Duke University. He was elected to the National Academy of Sciences for his research in organic and physical chemistry. He and his wife Sylvia have raised five sons and now live in Durham, North Carolina.