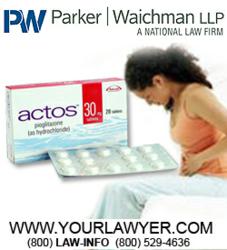 According to the complaint, the Plaintiff took Actos from 2004 and 2007; she developed bladder cancer around April 2006. The lawsuit alleges that Actos caused the bladder cancer, claiming that the Defendants were aware of this risk but did not inform the public. As a result of their negligent and/or fraudulent actions, the lawsuit is alleging severe mental and physical pain and suffering, past and future permanent injuries and emotional distress, economic loss due to medical expenses and living related expenses as a result of a new lifestyle. The suit also claims loss of consortium on behalf of the Plaintiff’s husband.

Actos is a medication approved to treat type 2 diabetes, a condition where the body fails to produce an adequate amount of insulin or does not utilize insulin efficiently. As a result, the body is unable to break down glucose for energy. Actos is intended to treat this problem by increasing the body’s sensitivity to insulin.

Actos was originally launched by Takeda and Eli Lilly. According to the lawsuit, Takeda announced the end of this joint venture in April 2006.

Recent studies continue to support the link between the diabetes drug and bladder cancer. Late last month, Canadian researchers found that use of Actos for two years was associated with a two-fold increased risk. The study was published in the British Medical Journal. [bmj.com/content/344/bmj.e3500?utm_source=feedburner&utm_medium=feed&utm_campaign=Feed%3A+bmj%2Frheumatology+%28Latest+Rheumatology+articles+from+the+BMJ%29]

Parker Waichman LLP continues to offer free legal consultations to victims of Actos. If you or a loved one were diagnosed with bladder cancer after taking Actos, please contact their office by visiting the firm's Actos injury page at http://www.yourlawyer.com. Free case evaluations are also available by calling 1 800 LAW INFO (1-800-529-4636).