An Environmentally Friendly Approach to Death 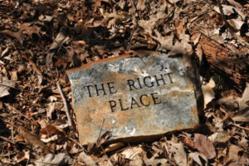 A person's death could help conserve the land as well as not pollute the environment around it.

It seems that every facet of life is being confronted by the need to go “green”. A new documentary film by American University Graduate student Ellen Tripler takes things a step further: green burials. Her film, Dying Green explores a growing trend that for many people which avoids cremation or traditional embalming and sees the simple burial of a body in the ground, dressed with only a shroud, as an eco-friendly alternative.

“Dr. Campbell’s idea was revolutionary. It wasn’t just ‘green’, it created a nature preserve for generations to come,” said Tripler. “A person’s death could help conserve the land as well as not pollute the environment around it.”

Dying Green looks at Dr. Billy Campbell, a physician from Westminster, South Carolina, who in addition to practicing medicine created a land preserve for green burials known as Ramsey Creek Preserve. The preserve not only offers green burials that are chemical free, but acts to preserve land from development for generations because of statutes regarding the use of land for cemeteries. The preserve doesn’t use any of the chemicals that a standard cemetery would use to maintain the grounds, such as pesticides and herbicides.

“I created this film out of my graduate work for at the Center for Environmental Filmmaking at American University,” added Tripler. “Professor Chris Palmer was instrumental in laying the groundwork for an idea I had that I felt was engaging and intriguing.”

The film has also had some luck on the awards circuit. The film is the only film this year to have won both a Student Academy Award and a College Television Award. It also won a CINE Golden Eagle in the dependent division, and is an official selection in the Rhode Island International Film Festival.