Antibalas - The Ballroom at the Taft Theatre - Saturday September 15

Tickets Go On Sale This Friday At 10AM. 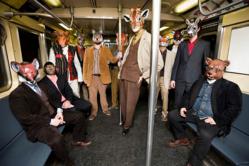 Fourteen years after their first gig, and five since the release of their last album, 2007's Security, Antibalas - Afrobeat's premier second-wave ensemble - are back with their fifth full-length release. Simply titled Antibalas, the album is both a blazing reaffirmation of the NYC band's collective musical strengths, and a hard-hitting continuation of their funkified excursions into what Antibalas founder and baritone saxophonist Martn Perna calls "our vault of esoteric sounds and knowledge."

General admission tickets, $15 ADV & $18 DOS (plus applicable fees), go on sale this Friday June 29 at 10 AM at http://www.ticketmaster.com, http://www.tafttheatre.org, the Taft Theatre Box Office and all Ticketmaster outlets including select Kroger stores. Charge by phone at 1.800.745.3000.

Born in a Brooklyn warehouse in 1997, 12-piece ensemble Antibalas is credited with introducing Afrobeat to a wider global audience, influencing countless musicians and developing a live show that is the stuff of legend. The group has performed everywhere from Central Park to Carnegie Hall to Rikers Island Prison, and that's just in New York. On the heels of the hit musical FELA!, which several members collaborated on, Antibalas has reunited with former member and producer Gabe Roth, who was at the helm for their first three albums. Daptone Records is set to release the band's first album in five years, self-titled, on August 7.

Members of Antibalas served as musical directors and the house band in the Broadway hit FELA! and penned original music for the show. Members have also recently collaborated/performed with Iron and Wine, Sharon Jones & the Dap-Kings, Mark Ronson, TV on the Radio and The Roots.