People who have everything have nothing like this! High Net Worth People are Being Challenged to Make a Difference by Purchasing a Solid Gold Masterpiece with a 400 year history in an effort to raise 25 Million dollars for Cancer Research. Author and treasure hunt expert Ron Shore makes the challenge after losing sister to cancer. 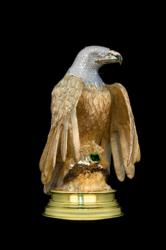 The Golden Eagle is unlike anything that anyone has ever seen – in any museum, anywhere in the world

A solid gold statue with a 400 year history known as The Golden Eagle, is being sold for 5 million dollars in an effort to make a difference in the fight against cancer. The benefactor / buyer will have bragging rights to owning The Atocha Star Emerald, the largest cut emerald from the Spanish Treasure Galleon The Atocha which was lost in 1622, and the largest solid gold statue of its kind in the world. By purchasing the eagle the buyer will also have made a significant contribution in the fight against cancer.

The solid gold statue of an eagle was commissioned by entrepreneur/ philanthropist and treasure hunt expert Ron Shore in an effort to make a real difference in the fight against cancer. His hope was to create one of the world’s most unique and valuable treasures, and then donate the proceeds from its sale to help fight cancer, in particular breast cancer -- a disease that took his sister just two days after giving birth to her daughter.

In addition, Shore has earmarked a substantial finder’s fee to anyone who helps find a benefactor / buyer for The Golden Eagle.

“The Golden Eagle is unlike anything that anyone has ever seen – in any museum, anywhere in the world” commented Shore, who has been featured in a number of national and international interviews on-air and in print. “In my travels as a treasure hunter and having visited the worlds’ great museums like: The Louvre, The Hermitage, Rijksmuseum and the Smithsonian, I have never seen anything like this statue. When on display people have stood and looked at it continuously for up to 30 minutes just taking in the brilliant reflections from the 763 diamonds and the intricacies of the gold work. While I truly love this unforgettable statue, the time has come for it to find its new owner, and fulfill its original intention: to help raise funds for breast cancer research. When my sister died just two days after giving birth to my niece, I made a promise that I would do whatever I could to strike the biggest possible blow in the fight against breast cancer. The sale of the Golden Eagle, will help make that happen.”

The Golden Eagle, is thought to be the third largest solid gold sculpture in the world. Some people have compared the beauty of The Golden Eagle to that of the legend of the Maltese Falcon. The eagle is hand-crafted in 18kt white gold, 14kt white and yellow gold and 10k yellow gold and took more than 4,000 hours to create with a team of more than 40 craftsman. Its head is pave set with 763 round brilliant-cut diamonds, and its eyes are bezel set in white gold with two pear-shaped brilliant cut diamonds. Cradled above the yellow gold base is the famed 12.72 carat “Atocha Star” emerald. The “Atocha Star” Emerald was recovered after spending almost 400 years at the bottom of the ocean and was part of the largest treasure ever recovered from the Spanish treasure galleon The Atocha.

A video of The Golden Eagle, and the rest of this remarkable story is available at http://www.TheGoldenEagle.ca.