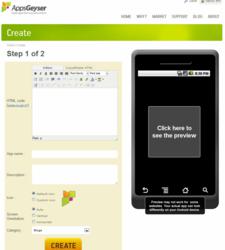 AppsGeyser Co-Founder Vasily Salomatov said, "By adding HTML editing to the app building process, we feel that we've made making a great app even easier."

AppsGeyser, a leading Android app building system, announces its latest innovation. With the HTML editing function, it's easy to build an app that contains just the right information and is available online. For example, a store owner wishing to provide store hours or its main inventory items for users can make an app in as long as writing and formatting the information takes. The Android app builder's HTML editor works like a simplified word processor, so anyone familiar with any of the common word processors or with HTML WYSIWYG editors will be able to use the editor without any special training. It's important to note that this feature can be used for any tab in an app, meaning that an app can have both static information in its HTML code and information linked to a website, a video channel, a Twitter feed, or any other document or web content.

AppsGeyser app maker Anthony Jones said "This is exactly the feature I've been looking for in an Android app builder. I really want to be able to make a custom opening screen, and have other tabs lead to my mobile web page and my YouTube channel. It also allows me to quickly make an About tab, separate from the About option in the app's menu. I've always liked AppsGeyser, and this new functionality is really a game-changer. I know my apps will be better now."

AppsGeyser Co-Founder Vasily Salomatov said, "We love being able to offer beginning Android app builders yet another way to make a useful app even if they can't code. By adding HTML editing to the app building process, we feel that we've made making a great app even easier."

About AppsGeyser,
AppsGeyser is the fastest-growing DIY app generator. Since its launch in February 2011 it has seen more than 185,000 apps created on its platform. There have been more than 65 million downloads of its apps.