Why Are Kris Kardashian and Bruce Jenner Feuding Once Again? And Why Did She Get A Fat Lip?

Kris and Bruce are feuding again over some emailing between Kris and her ex-boyfriend Todd Waterman. Kris Kardashian gets a fat lip while on vacation which actually cooled things down. 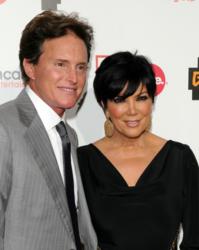 Kris Jenner got away with her questionable judgement about seeing ex-flame Todd Waterman, when hubby Bruce felt sorry for her

It looks like Bruce Jenner and Kris Kardashian are at it again but this time Bruce may have a good reason to be sleeping on the couch. It seems that Kris has been contacting her ex-boyfriend Todd Waterman through emails and Bruce found out about it while they were on their vacation in the Dominican Republic. Did Kris and Todd meet in person somewhere?

Things started heating up even more when Kris got a fat lip from an apparent allergic reaction to some food that she ate.

"A food allergy to something she consumed at the Casa de Campo resort in the Dominican made her look like she had Lisa Rinna's lips after her bad plastic surgery. Her kids ridiculed her and so did Bruce, just a bit anyway making Kris vulnerable and calling for medical assistance. After taking some medication and icing it for the better part of a full day inside, Kris braved being seen in public and forced herself to have dinner with the family."

"Kris' refusal to clear up the mystery of emails from Todd Waterman and whether she met privately with him as he asked. The matter was never really settled, at least on camera for the E! reality television show cameras but Bruce refused to sleep with Kris after walking away from the dinner table disgusted."

A representative of BillionairesBunker.com states that Many celebrities like Kris Kardashian are catching some unneeded heat from the public eye because of their smoking habit but her contact with her ex-boyfriend could be more of a serious problem at this time. Hopefully the truth will come out but it looks like she dodged a major bullet and her allergic reaction may have been difficult for her but may have saved her marriage.
Bruce wants to know what is up with Kris, and her ex Todd Waterman