Methylphenidate prescriptions have increased fourfold in the last decade, and yet estimates as to its effectiveness suggest a sizeable 'gap' where children do not respond to such drug-based treatment. A recent double-blind pilot trial shows a potential natural treatment breakthrough that may help fill this gap for children resistant to medication. 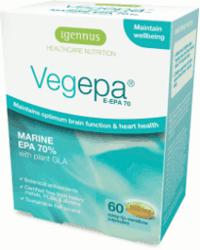 After six months, statistically significant improvements were seen in the treatment group when compared to the placebo group in the areas of restlessness (81.2%), aggressiveness (87.5%) and academic performance (77.1%).

ADHD currently affects around 5-10% of school-aged children (2) and it is estimated that a quarter of ADHD students have serious learning problems in areas including oral expression, listening skills, maths and reading comprehension. (3)

The study, published in the Journal of Child Neurology, recruited 94 children clinically diagnosed with ADHD, who had been on methylphenidate (commonly known as Ritalin) for six months or more, as well as standard behaviour therapy, but had reported no improvement in behaviour or academic learning.

These treatment-resistant children were then randomly assigned to receive supplementation with either two capsules of Vegepa E-EPA 70 daily – a highly purified fatty acid supplement providing 560 mg EPA and 18 mg GLA – or a placebo. EPA is a unique type of omega-3 fatty acid renowned for its neuroactive properties (moderating cognitive function), extracted from anchovy oil and purified to a highly concentrated form suitable for clinical dosing. All children continued to take Ritalin daily.

After six months, statistically significant improvements were seen in the treatment group when compared to the placebo group in the areas of restlessness (81.2%), aggressiveness (87.5%) and academic performance (77.1%). Statistically significant improvements in behaviours such as inattention, impulsiveness and cooperation with parents and teachers were not found at three months but were shown at six months, highlighting the importance of the duration of this treatment regime.

Professor Basant K. Puri, of Imperial College London, a research scientist and psychiatrist, and author of 'A Natural Way to Treat ADHD', commented: “Whilst previous studies have reported mixed outcomes of omega-3 supplementation in ADHD-diagnosed individuals, this is the first study to report highly significant findings from a combination of EPA with GLA. The efficacy of pure ethyl-EPA in combination with GLA further supports the concept that EPA is the primary omega-3 responsible for the psychoactive and neuroactive properties associated with fish oils. Further studies are certainly warranted, but these results are consistent with previous research on pure EPA [depression]. They would indicate that specific supplements can offer safe, natural and effective solutions, either as alternatives to conventional drug treatments or as effective co-therapies.

These results have positive implications for parents concerned about reliance on standard drug treatment, where natural and safe adjunct treatments may provide some symptomatic relief for their children. Parents should discuss such an approach with their child's doctor and also, if possible, obtain professional nutritional guidance. It is important never to stop any existing medication without medical advice.”

Vegepa E-EPA 70 is priced at £13.99 for a 1-month supply. This formulation is also available in child-friendly chewable capsules for those who have difficulty swallowing. Available from shop.igennus.com, Bodykind.com, and all good independent health food stores.

Igennus Healthcare Nutrition specialises in the production of clinical-grade EPA-based supplements, offering natural and science-backed solutions for health, alone or in conjunction with standard and complementary therapies. We are proud to have pioneered a new phase of purified ethyl-EPA products, which started with our first patented product Vegepa E-EPA 70. Our products contain EPA derived from sustainable marine anchovies – ultra-pure, pharmaceutical-grade and free from PCBs, mercury and dioxins.

Used and endorsed by world-leading authorities on fatty acids – both for research and clinical purposes – Vegepa E-EPA 70 is taken by thousands of people for a variety of conditions. Vegepa has been recommended in peer-reviewed scientific journals, as well as having received worldwide media attention for its clinical efficacy, including national print media, radio and television coverage.