The Texas Poker Store staff took a break from editing the "I May Be Bluffin'" music video to follow the 2012 World Series of Poker Main Event and now congratulates the "October Nine" Finalists. 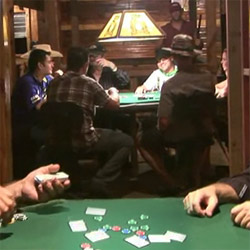 Scene from "I May Be Bluffin'" music video

We staged a Texas Hold ‘em tournament and the actors played their parts perfectly. We reached a final table that will be played in August to conclude production of our music video of "I May Be Bluffin'"

The Texas Poker Store is offering a 10% discount on all poker chips and poker chip sets, including all chip cases, carousels, and chip trays in stock to celebrate their music production of "I May Be Bluffin'" and the 43rd World Series of Poker's “October Nine” Finalists.

The Texas Poker Store has been keeping a very close eye on the 2012 World Series of Poker, blogging about all WSOP events and reporting on the winners of each event on a regular basis.

“We were thrilled to report when one of our all-time favorites, Antonio Esfandiari, made poker history when he won the “Big One for One Drop” and collected the biggest prize paid to any winner in ANY sport!” said TPS owner, Jim Paris. TPS continued to keep its followers informed about the WSOP National Championship and the WSOP Main Event…Event # 61, which determined the Final Nine players for the Final Table to be played in October.

In the meantime, The Texas Poker Store has its own “Final Table” to think about. After production of their new poker song, “I May Be Bluffin’” co-written by Paris and Texas Rock and Blues artist, Randy Pavlock, production began on the music video, with the goal of releasing it in October, in time for the Final Table of the 43rd Annual World Series of Poker.

Shooting the video for their new poker hit began on Saturday, June 30, in a rustic country barn, or “man cave”, complete with poker tables, shuffleboard and craps tables . . . even a dancing stage for those brave enough to show off their moves.

“After storyboarding the entire shooting sequence and casting sixteen “actor/players” for various roles, our producer/director and videographer, Kyle Netterville, shot hours of footage at the barn, while I helped direct the action, “ said Paris.

“We staged a Texas Hold ‘em tournament and the actors played their parts perfectly. We reached a final table that will be played in August to conclude the production of our music video of "I May Be Bluffin'." There was Chris “Crazy 8’s” Ferrar, Steve “Lucky” Greene, John “Mad Professor” Hoyle, and the favorite to win, Francisco “El Guapo” Navarro. At the end, Paul “My House, My Rules” Marvin, Troy “T-Licious” Davidson and myself, Jim “Chief Dealer” Paris were left in the game.

The three players who remained in the game are now waiting for the return of Randy Pavlock, who is currently on tour in Norway with his band, Twenty Four Seven.

“Pavlock sings ‘I May Be Bluffin’ and is definitely the star of the video,” said Paris. “Shooting will continue when the four of us meet at the ‘final table’ to be played during the first week of August, when Pavlock returns from his European tour.”

The Texas Poker Store was founded by Jim and Lynn Paris in 2011. Located in Bryan/College Station, Texas, the Texas Poker Store is a fully-stocked online poker store that offers 100 percent secured shopping. It features hundreds of poker supplies, from poker cards to the finest in luxury poker tables, folding poker tables and a variety of poker table tops. It carries poker chips and chip cases, poker novelties and collectibles, poker books and DVDs and the perfect gifts for any game room. You can find the Texas Poker Store's website at http://www.texaspokerstore.com, or visit their blog at http://www.texaspokerstoreblog.com. Follow them on twitter and keep up with them on Facebook and Pinterest.

Well known for his Texas Rock and Blues sound from the river bottoms of the 'Blues Capital of Texas', Randy Pavlock together with his band, "Twenty Four Seven",deliver the very best in hard-driving, yet heartfelt original Texas blues!

I May Be Bluffin' Poker Chip