According to data compiled by the Illinois Foreclosure Listing Service (ILFLS.com), foreclosures are still rising for June 2012 in six of seven Chicagoland counties compared to June last year and to May 2012. The total number of home foreclosure filings for the seven counties for June 2012 reached 6,645. 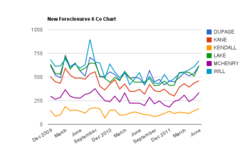 According to stats compiled by ILFLS.com, the Illinois Foreclosure Listing Service, Chicagoland foreclosures are still on the rise for June 2012 in the following six counties: Will, Kane, Lake, McHenry, Kendall, and DuPage. According to the data, property foreclosures have increased overall in the Chicagoland area compared to the previous month, May 2012, and compared to last year, June 2011.

In June, six of the seven Chicagoland counties showed an increase in foreclosure activity compared to May 2012. The total number of home foreclosure filings for the seven counties for May 2012 was 6,440. This is moderately lower than the total for June which reached 6,645. This is an overall increase of a little over 3% compared to last month. The largest increases from May to June were seen in the counties of McHenry, Lake, and Kendall. The largest increase was seen in McHenry going from 273 in May and increased over 23% to 336 in June. Lake county also increased significantly, 21.41%, going from 509 in May to 618 in June. In Kendall County, foreclosure filings jumped from 143 in May to 165 in June accounting for over a 15% increase in filings.

An increase in foreclosure filings was unfortunately expected. The foreclosure process was slowed down, and in many cases stalled completely, since late 2010 because of multiple federal and state investigations into fraudulent mortgage-servicing techniques that became generally known as the robo-signing scandal. The robo signing scandal was finally settled upon earlier this year. Because of this, servicers and lenders are just starting to go through the backlog of foreclosures to file foreclosures that should have already been processed last year. As the distressed loans are being filtered through, there’s a certain batch of those that are initially being pushed through the foreclosure process: those that aren't deemed a good fit for a loan modification, do not qualify for government refinancing programs, or even short sales.