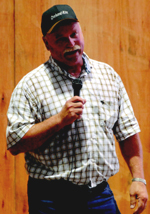 One of the biggest attractions of the Tri-State Pecan Show is that it gives you an opportunity to see a different operation, and to get a different perspective on how to problem-solve and work through the issues you encounter as a pecan grower.

Natchitoches Pecans, Inc. recently participated in the Tri-State Pecan Convention & Trade Show, an annual meeting for pecan growers from Arkansas, Mississippi, and Louisiana—and this year, the family owned and operated company hosted part of the show at its own orchard.

Growers come to this yearly convention for recommendations about fertilization, information on new products, and advice about what to look out for in the coming year. One of its features this year was a demonstration at the Natchitoches Pecans orchard, which utilizes a new machine from Savage Equipment that sorts in-shell pecans by color, automatically picking out the bad ones.

“One of the biggest attractions of the Tri-State Pecan Show is that it gives you an opportunity to see a different operation, and to get a different perspective on how to problem-solve and work through the issues you encounter as a pecan grower,” said Natchitoches Pecans co-owner Julie Swanson. “The sorting machinery we’ve implemented at our orchard has really improved our efficiency, so we were thrilled to get a chance to show other growers how it works.”

One hundred and sixty growers—the majority of the trade show’s attendees—attended the demonstration, which was followed by a catered barbecue lunch served in Natchitoches Pecans’ orchard.

The two-day show concluded the next day with the release of 2012’s first Pecan Crop estimate. Based on Tri-State Grower member input, the projection for the year is 265 million pounds—a number considered encouraging by experts, in view of the drought experienced by growers in the region last year.

Swanson was cheerful about Natchitoches Pecans’ prospects for the year. “We’ve had good pollination, and we’re happy with how things are shaping up this season,” she said. “So far so good!”

Established in 1987, Natchitoches Pecans, Inc. is a family owned and operated pecan orchard. Mark Swanson sees to the everyday operations, his wife, Julie, takes care of Little Eva's Pecan Store and the mail-order business, and their mothers, brothers, sisters, nieces, and nephews all help wherever needed. Natchitoches Pecans is proud to provide high-quality, gourmet Louisiana pecans for all of its customers. For more information, or to place an order online, visit http://www.natchitochespecans.com.