Bardstown, KY is the Most Beautiful Small Town in America - Wins Honor in Rand McNally/USA TODAY ‘Best of the Road’ 2012 Contest

Bardstown, Ky., the “Bourbon Capital of the World,” has been chosen the “Most Beautiful” small town in America in the Rand McNally/ USA TODAY “Best of the Road” contest. 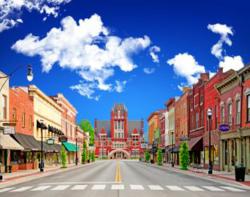 Bardstown, Ky., the “Bourbon Capital of the World,” has been chosen the “Most Beautiful” small town in America in the Rand McNally/ USA TODAY “Best of the Road” contest. This designation, announced July 17 in Seattle, Wash., was determined through a nationwide contest of 650 nominated towns, where judges were sent cross-country to visit each of the 30 finalists in five different categories, including Most Beautiful, Friendliest, Most Fun, Most Patriotic and the town that has the Best Food.

The Travel Channel will air a special program, hosted by Bert Kreischer, at 8 p.m. ET, Wed., July 25, featuring the “Best of the Road” communities and the videos filmed during visits to each of the finalist towns. Road Rally team, Two for the Road – Nikki and Dusty Green – visited each of the six finalists in the Most Beautiful category to weigh in on its charms. Besides Bardstown, the finalists included Danville, Ky.; Sedona, Ariz.; Jim Thorpe, Penn.; Baker City, Ore.; and Tybee Island, Ga.

“Being selected as Most Beautiful Small Town in America is a tremendous honor and the exposure we receive will be a wonderful boost to our marketing efforts,” said Dawn Ballard Przystal, vice president, tourism expansion and marketing of the Bardstown-Nelson County Tourist & Convention Commission. “We really appreciate Nikki and Dusty, who did such a wonderful job portraying to the judges the beauty of Bardstown.”

In late June, the couple were met in the “Bourbon Capital of the World” with a parade, a gathering on Courthouse Square and a special bourbon drink, the Doo dah. They toured a number of Bardstown’s attractions, saw its well-preserved architecture and bustling downtown shops, sampled the local cuisine and even attended a wedding.

“The people here have brought us in, we feel like family,” Nikki Green said of her experience in Bardstown. “I feel like we made lifelong friends.”

Bardstown has a population of just over 11,000 residents. Major attractions include the distilleries of Kentucky Bourbon Country – Heaven Hill, Jim Beam and Maker’s Mark – My Old Kentucky Home State Park and “Stephen Foster Story” outdoor musical that takes place in the park, My Old Kentucky Dinner Train, Kentucky Railway Museum and excursions, the Civil buildings in Bardstown’s historic downtown district are on the National Register of Historic Places.

Visit http://www.SampleOurSpirit.com to see why Two For the Road fell in love with Bardstown and why it is the Most Beautiful Small Town in American.

ABOUT BARDSTOWN | The “Bourbon Capital of the World,” Bardstown sits in the heart of Kentucky Bourbon Country, home to five distilleries, including the restored and newly re-opened Willett Distillery, known for its unique bourbon and rye whiskeys bottled by hand in very small batches. Three of Bardstown’s distilleries – Heaven Hill, Maker’s Mark and Jim Beam – are on the famed Kentucky Bourbon Trail. Major attractions include the “Stephen Foster Story,” Kentucky’s official outdoor drama that takes place in My Old Kentucky Home State Park; the Civil War Museum of the Western Theatre (one of the four most significant such museums in the country); The Kentucky Railway Museum, where Thomas the Tank Engine is known to put in appearances; and My Old Kentucky Dinner Train. Additionally, Bardstown has four 18-hole golf courses, three self-guided tours (Historic Downtown Walking, Architectural and African-American), two wineries and numerous religious attractions.