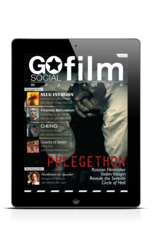 We’re pioneering a whole new distribution model for short films. One that works together with filmmakers, producers and film festivals to bring audiences around the world a fun, interactive viewing experience via their iPads.

Launched this past May at the Cannes Film Festival, the digital iPad magazine Go Social Film is unique in that it streams entire short films to its readers directly from within its multimedia articles. Films that previously might have only been seen in their home countries or at film festivals, can now be shared with viewers anywhere in the world that iTunes delivers content to, and all in the form of a digital magazine complete with articles and interviews with the filmmakers.

Magazines like Go Social Film are fulfilling an important need for the global film community, giving directors a place where their films can be seen, and audiences a place to discover talented filmmakers from around the world and explore their films.

"Go Social Film is a welcome addition to indie filmmaking. There are not that many platforms where shorts have a voice outside the festival circuit, Go Social Film is a great opportunity to be heard."
Alex Sufit, director “Gentlemen In Squalor”

With the goal of not only helping talented filmmakers grow their audience, but also to connect with peers internationally, Go Social Film Magazine incorporates social media channels like Facebook and Twitter into each article enabling film viewers to reach out to filmmakers, make contact and share ideas and opinions.

“We’re pioneering a whole new distribution model for short films. One that works together with filmmakers, producers and film festivals to bring audiences around the world a fun, interactive viewing experience via their iPads."
Jason Rogan, Artistic Director, Go Social Film Magazine

Go Social Film Magazine is published by Go Social LLC. Each month readers are treated to a variety of short films from filmmakers around the world, and are taken behind the scenes to meet the filmmakers and learn about the production of their films through exclusive interviews, unseen footage, and interactive multimedia articles.
Go Social Film Magazine’s mission is to seek out talented international filmmakers with unique and compelling short films, and bring them to a global audience via the iPad.

Featured short films in Issue #2 include:

Go Social LLC is a San Francisco based publishing and social media marketing company with partners in New York and Amsterdam, The Netherlands.