The name "Winchester" conjures up images of rifles and the American West, but the Winchester on display at the Cody Firearms Museum has two wheels and looks a lot like its cousin Harley Davidson. 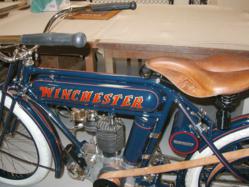 ...it is the only one of the original 200 Winchester motorcycles still in existence...

It looks brand new, but it’s really 102-years-old. It bears the Winchester name—as do hundreds of thousands of famous firearms, but this is not a gun. It’s a motorcycle now on display in the Cody Firearms Museum at the Buffalo Bill Historical Center in Cody, Wyoming, where it’s attracting a great deal of visitor attention—and even astonishment.

The Winchester Model 1910 motorcycle is powered by a single cylinder, six horsepower engine. It was advertised with metal store signs and special edition pocket watches.

While it doesn't look much like a typical contemporary motorcycle, it shares many of the features of those produced by other manufacturers, such as Harley Davidson and Indian, during the same time period.

This remarkable artifact is on loan to the Historical Center from the collection of Ray Gibson of Turlock, California.

Committed to connecting people with the Spirit of the American West, the Buffalo Bill Historical Center, located at 720 Sheridan Avenue in Cody, Wyoming, weaves the varied threads of the western experience—history and myth, art and Native culture, firearms technology and Yellowstone natural history—into the rich panorama that is the American West. The Center, an Affiliate of the Smithsonian Institution, is operating its summer schedule, 8 a.m. – 6 p.m. daily. For general information, visit their Web site, or call 307.587.4771.

(Downloadable images are available in the newsroom section of the Center's Web site.)