The 12-panel system is expected to pay for itself in about seven years. 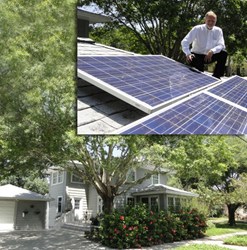 Council Member Karl Nurse kneeling next to the new solar panels installed on his garage by Solar Source.

I think of this as insurance to protect me from the rising cost of power.

Solar Source completed the installation of a 3.06 kilowatt solar electric (photovoltaic or PV) system on the home of St. Petersburg City Council Member Karl Nurse. Nurse expects his system will generate all of the electricity his home requires for about six months out of the year; thanks to efficiency improvements he’s made over the last decade.

“I think of this as insurance to protect me from the rising cost of power. These panels are going to pay for themselves in about seven years, perhaps sooner depending on future electric rates,” said Nurse.

Nurse will receive a 30% Federal Tax Credit and rebate from Progress Energy for purchasing his solar electricity system. He originally sought to apply for the Progress Energy rebate back in 2010, but could not get through. In 2011 he attempted again and made it to the waiting list. Luckily for him, funds from 2011 became available as others failed to meet shading requirements necessary for approval, and his rebate application was approved. The rebate of a $2 per watt is highly sought after and tends to run out quickly. According to their website, Progress Energy has allocated $1,000,000 per year towards residential PV incentives through the year 2014.

Solar Source installed nine Solar World Modules on Karl’s house and three on his garage. His system includes micro-inverters, which makes the conversion of sunlight into electricity more efficient. “I wanted to find a contractor who knew what they were doing, and Solar Source is the largest and most experienced in our area,” said Nurse. Solar Source was able to increase the size of his system and decrease the cost using the latest technology available.

A long-time advocate for renewable energy, Nurse spearheaded a program for the City of St. Petersburg that offers residents the opportunity to buy solar hot water heaters through a bulk-purchasing program. To date, about 400 residents have signed up for the program, which allows them to purchase solar water heaters at a discount price.

The City of St. Petersburg has made significant investments in renewable energy over the last two years. Earlier this year, the city installed 21 solar water heaters, which are expected to save approximately $20,000 per year on utility bills. Solar Source is also installing photovoltaic systems on recreation centers and park facilities throughout St. Petersburg through the Solar Parks Initiative.

Said Nurse, “The very best thing we can do for this country is become self-sufficient, and renewable energy is the cleanest way to do that.”

Solar Source installed the first roof top megawatt PV system in Florida and a 1,200 panel solar array at Naval Station Guantanamo Bay. Solar Source completed a large domestic water-heating project for Walt Disney World in Orlando, FL and has heated the pools for the Olympic Games in Atlanta in 1996 and Athens in 2004. Solar Source is the founding entity of Solar Source Institute, a licensed educational facility that provides solar training for the construction industry.