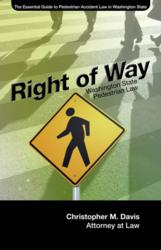 Our firm has always maintained a strong stance in that there is no such thing as a drunk driving ‘accident.’ These collisions are 100 percent avoidable and there needs to be an even greater focus on deterrence.

According to a recently-released news brief from the NHTSA on the trend of traffic-related pedestrian fatalities on average, a pedestrian was killed every two hours and injured every eight minutes in traffic crashes in 2010 which revealed represents a four percent increase from the previous year.

Seattle accident attorney Christopher M. Davis, who literally wrote the book on pedestrian accidents and injury claims in Washington State, says that this increase is a troubling sign for the country’s future in pedestrian safety.

“We have seen the number of pedestrian deaths continuously decrease in recent years,” says Davis, an accomplished attorney and author in Washington State. “The fact that the NHTSA’s data shows an increase in this number is extremely troubling and concerning to me.”

There were 4,280 total pedestrian fatalities in the year 2010 – the most recent year for which data is available – and those deaths represented 13 percent of all traffic fatalities for the year. Although it was a four percent increase from 2009, it is an overall decrease of 13 percent from the 2001 totals.

Davis, who authored the entire Washington Accident Books series including “Right of Way: Washington State Pedestrian Law,” believes that deterring impaired drivers should be a priority for authorities and lawmakers hoping to reduce the risk of pedestrian deaths.

“Our firm has always maintained a strong stance in that there is no such thing as a drunk driving ‘accident.’ These collisions are 100 percent avoidable and there needs to be an even greater focus on deterrence,” Davis added.

NHTSA data seems to support Davis’s thesis on preventing impaired drivers from getting behind the wheel. According to the brief, drunk driving was a factor in 14 percent of all pedestrian deaths. To take that even further, the NHTSA says that alcohol – present in either the pedestrian or the driver of the vehicle – was reported in approximately 47 percent of all fatal pedestrian crashes.

Davis’s book, “Right of Way,” is part of the Washington Accident Books series and is available at http://www.WashingtonAccidentBooks.com. As a public service to victims of these tragic accidents, residents of Washington State can obtain a copy free of charge for a limited time.