Life and Works of the Huguenots Portrayed Vividly in Historical Novel 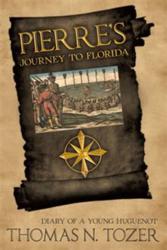 The Huguenots. Nobody really knows the origin of their name. Yet, these facts are known: in the 16th century, they were French Protestant reformers who traced their roots to Martin Luther, later influenced by John Calvin, and they were extensively persecuted.

From Thomas N. Tozer comes Pierre’s Journey to Florida: Diary of a Young Huguenot in the Sixteenth Century, a historical fiction book that fulfills a two-fold mission. It shares the trials and triumphs of the Huguenots and brings to light their persecutions and eventual contributions that have influenced and transformed American and European societies and cultures, albeit unbeknownst to most.

Tozer’s book is the story of Pierre de Bré as told by his great-great grandnephew, Jean-Louis Hardouin. It is reconstructed from Pierre’s diaries and information handed down within Jean-Louis’ family. Though a fictional story within a historical setting, it does paint a personal and clear picture of what it was like to be a Huguenot in the 16th, as well as the 17th, century.

It opens with a brief account of the socio-political and religious climate in Europe during Pierre’s lifetime. Next, it recalls his early years when many of his Huguenot family and friends are massacred. Then, it recounts his departure from France, the catastrophic events for the French in Florida at the hands of Spanish Catholics, his years of living with the Timucua Indians, and the historic dramas, such as the St. Bartholomew’s Day Massacre, that take place with French Catholics on his return home.

Filled with illustrations, author’s comments, and references aside from an engaging narrative, Pierre’s Journey to Florida: Diary of a Young Huguenot in the Sixteenth Century is a one-of-a-kind literary masterpiece that entertains, educates, and empowers the present generation with lessons from the past.

About the Author
Thomas N. Tozer’s professional career has been in academia in the pharmaceutical sciences. He has written many scientific papers, book chapters and books. This is his first attempt at writing a novel. He feels that writing the story of Pierre de Bré’s story has been a wonderful and educational experience for him and has made him feel like he has sampled the experiences of his own ancestors.