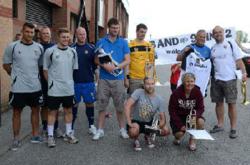 It’s an incredible achievement for the group and we extend our congratulations.

Leading European car rental company ArgusCarHire.com and a team from Birmingham Citadel’s Salvation Army Band today announced that following a 92-hour challenge which involved visiting 92 football stadiums located across the UK, the band has raised over £5000 for Cancer Research UK.

The Birmingham rental car brought the group from their starting point in Aston Villa to cities all over the UK including Leeds, Newcastle, London and Cardiff.

While visiting the 92 stadiums members of the band also set themselves the task of performing brass renditions of the teams’ anthems where possible.

Port Vale in Stoke on Trent provided the setting for the finish line. Here the group was greeted by local media from BBC Radio Stoke.

In the end, the group managed to complete the task within 77 hours, beating the target of 92 hours.

Commenting on the challenge, a spokesperson for Argus Car Hire said:

“We are proud to support Cancer Research UK and delighted to have played a part in helping the Citadel Band to complete the challenge. It’s an incredible achievement for the group and we extend our congratulations.”

A number of football clubs have also donated memorabilia and these items are due to be auctioned next week to raise further funds for the charity.

Laura Sharman, a spokesperson for 92 in 92 said:

"When my husband Mark came up with the idea a few months ago, I never dreamt it would spiral into what it has done today. The support we have received has been phenomenal, so many of our church members have been affected by cancer over recent years, as well as close family and friends. We just wanted to do something practical to help. I personally have used Argus Car Hire a number of times in the past both at home and abroad, so I could hardly believe it when they made their generous offer of the fantastic hire car, and then when Timeline Musical Theatre and Pure Technical Services offered to cover the cost of our fuel. We of course also need to thank all those supporters who turned out to meet the gang at so many of the grounds, and to all those who have helped us reach our target as the donations continue to come in."

For more information or to support the challenge, visit the Birmingham Citadel Band’s dedicated charity website:

Argus Car Hire was established in 1959, online since 1996. ArgusCarHire.com is recognised as one of the world’s leading rental car consolidators. The company’s ‘direct connect’ technology allows customers to search hundreds of suppliers and book their rental car or camper van in just three clicks. Currently 550 of the world’s most trusted car hire companies subscribe to the system, providing Argus customers with the lowest all-inclusive pricing in 22 languages at 25,000 locations including airports, train stations, ferry ports and city centres in 134 countries worldwide.