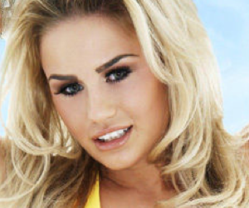 Khloe Evans is a household name in the UK and the The Web Trends are astounding.
Shari Rock, Editor, Dirt

Dirt.com reports that Khloe Evans is their most searched celebrity according to their DirtBlurb Trends Spotter Technology. Khloe ws the final choice of The Bachelor UK this week, and the searches for her on Dirt.com’s Dirtblurb have increased an astonishing 824%.

The UK Bachelor Spencer Matthews made his choice in the final of The Bachelor UK by selecting Khloe Evans over Tabby Richards in the series finale. According to the Mirror, “minutes after the show aired, Khloe punctured UK’s romantic dreams of them walking off into the sunset together by tweetin: “All am saying #louiseandspencer goodnite :D” The Mirror added,” Made In Chelsea fans will know that the hashtag is referring to Spencer’s former girlfriend Louise Thompson, who admitted in June that “we’re still speaking everyday and I still love him.” This twist in the the show final has made Khloe a household name in England.

Shari Rick, Dirt.com spokesperson says, "While the US hasn’t really paid much attention to Khloe Evans, the people in the UK have reacted to her fanatically. Our Web Trend Technology has her skyrocketing.”ABOUT Dirt.com:

Dirt.com has already been read by people in 178 Countries and brings a new approach to the entertainment landscape by publishing original editorial content whereby readers and writers co-exist by making the site their preferred platform for sharing opinions on News, Gossip and Entertainment. Dirt.com is rapidly becoming a leading worldwide entertainment media brand. Dirt.com covers 30,000 celebrities and has access to the world's largest database of celebrity photos. Team Dirt's dirtarazzi and dirt reporters report on world breaking stories and scandal from Hollywood, L.A. , Malibu, New York, Miami, St. Tropez, St Bartes, Paris, Rio, and London. Dirt polls are not scientific and for entertainment purposes only. Dirt.com has been called the World’s First Citizen News And Opinion Network Dirt.com is in the business of providing digital entertainment to the masses. Dirt.com's new DirtBlurb offers real time information about people, places and things, and empowers people's decision making through information and online intelligence The company's guiding mission is to become the leading provider of digital entertainment and online intelligence services. The Dirt.com DirtBlurb search platform, recently introduced in Beta, places the power of information in the hands of the consumer. The platform is committed to helping every individual use the Internet to empower themselves to be able to make informed, intelligent decisions regarding their live, the people they know, and the world around them. Dirt.com is lead by Founder and CEO Andy Jacob, and a team of experienced and successful entrepreneurs, technology gurus, and inline visionaries who believe in the power of entertainment, the power of information and power of the people. The Dirt.com team is committed and passionate about making its DirtBlurb the most widely recognized and trafficked people dirt engine on the Internet today .To learn more about the DirtBlurb, visit Dirt.com