August Saw One Successful Abduction and Another Attempted Abduction, Highlighting the Need for the Accutech Cuddles Infant Protection System. 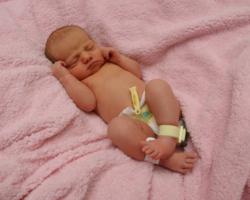 It is a new mother’s worst nightmare; in the days after giving birth, her newborn baby is abducted from the hospital or birthing center as she rests. While this threat is rare, it is real, as recent incidents including one at Magee-Women's Hospital in Pittsburgh, PA on August 23rd and another attempted infant abduction in Southern California make clear. As is common with infant abductors, Breona Moore, 19, of McKeesport had been telling her family that she was pregnant for months. Last Thursday, she entered the room of Rhonda King and her 3-day old baby Bryce at the Magee-Women’s Hospital after telling a nurse she was Ms. King’s sister. According to Ms. King’s grandmother, Thelma Broughton, the suspect entered the room posing as a nurse. "She said she was taking the baby to get a checkup, that she would bring the baby right back. But she never came back."

A press release from Magee-Women’s Hospital states that a nurse removed the infant’s security tag at 12:34 p.m. just prior to the mother and baby being released. A security camera shows a woman later identified as Breona Moore leaving the hospital with the baby at 1 p.m. "At 1:15 p.m., the father alerted the staff that the family was ready to depart and then it was determined that the baby was missing. Hospital staff immediately searched the unit and followed other internal security procedures. Police were called at 1:44 p.m." A tip from the suspect’s family led police to the suspect and the successful recovery of the infant unharmed. "The baby abducted today from Magee-Women’s Hospital of UPMC has been examined by our physicians and found to be in good health," said the release. "Mother and baby have been reunited." The statement goes on to say that, "While we will review our security procedures, it was obvious that our training and internal drills prepared us to respond quickly in cooperation with both the Pittsburgh Police and the FBI. Everyone did a great job and we are grateful for a positive outcome.”

In a Pittsburgh Post-Gazette article about the abduction, the reporters interviewed several people who have given birth at Magee-Women’s Hospital about security procedures. While all acknowledged the protocols in place, one father of triplets, who spent two months in Magee's neonatal unit, commented on the frequent number of false alarms he heard during his time there. When a mother and baby reach the postpartum room, a tag with an RFID security chip in it is placed around the infant’s ankle. The security chip triggers an alarm if it ever gets loose or cut: lights flash, doors lock, and an announcement comes over the public address system that "a 'hugs' band has come loose." Several other parents said that the security tags often fell off and created false alarms.

False alarms can be caused by security bands falling off of infants in the days after their birth due to improper application, postpartum weight loss, or by radio frequency interference caused by nearby machinery or other outside signals. Maintaining a safe environment can be a challenge when persistent false alarms reduce the urgency of addressing each new alert. False alarms on maternity floors are disruptive and upsetting to new parents and can harm the quiet environment fostered by nursing staff. They may also lead to alarm fatigue, which reduces the urgency required to respond. Infant protection systems must be sophisticated enough to overcome these challenges and remain a trusted and effective security tool. The Cuddles system from Accutech Security addresses these issues with several key features. The Cuddles infant protection system self-adjusting soft band bracelet compensates for postpartum weight loss and avoids the false alarms that come with slippage. The soft, cushioned band is also comfortable and won’t irritate newborn skin, so it can be applied snuggly when the baby is born. Cuddles has the lowest interference rate of any infant protection system as it operates at a unique frequency that’s just below the maximum mandated by the Department of Defense, making the system less prone to outside influences that cause false alarms. In addition, there is a mother and baby match option to protect against accidental “baby switching”.

While incidents of babies being switched or abducted from a hospital or birthing center do not happen often, when they do, it serves as a reminder for the importance of a vigilant, well-trained staff and protective technology that triggers an alarm if an infant is taken out of the unit or their wristband is cut. Mother and baby match technology also ensures that there is never a mistaken identity leading to parents taking home the wrong child. These critical technology components must work consistently, be operated easily and be trusted by nurses and staff in order to be effective in keeping maternity wards secure and new patients safe.

About Accutech
Accutech has engineered, manufactured, distributed and serviced radio frequency identification (RFID) and wireless products since 1985. They are an industry leader in the infant protection, resident wandering and pediatric elopement fields, with ongoing development, implementation and integration of healthcare related security systems. Their markets primarily consist of hospitals, birthing centers, assisted living facilities, skilled nursing homes, sub-acute facilities and even residential homes. All Accutech systems are manufactured in the U.S. and backed by the industry’s most comprehensive customer support program.