Companies House figures researched by formation experts Duport.co.uk show that there have been a record number of new companies set up in Leigh during the last quarter of 2012. 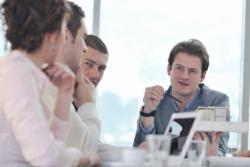 New companies are forming in Leigh

New companies are wise to set up here as they will reap the rewards of a growing economy and, in turn, bring more wealth to the area as they develop.

Leigh: Greater Manchester town, Leigh has seen a record second quarter in terms of new company formations. There were 60 new companies set up, smashing the previous second quarter record of 37 that was set in 2007.

The town is undergoing significant regeneration. Last year, a £50 million town centre development called “The Loom” opened on the north side of the Bridgewater Canal. As well as shops, The Loom contains a seven screen cinema and a variety of restaurants.

More redevelopment is planned for the North Leigh area, which could generate up to 7200 construction jobs and 1300 permanent jobs. The project will cost £310 million and will focus on reducing congestion, building new homes, creating public open space and providing new community facilities.

“With such a lot of investment going into Leigh, the economy is bound to benefit in years to come. New companies are wise to set up here as they will reap the rewards of a growing economy and, in turn, bring more wealth to the area as they develop.”

With business start-ups flocking to the area and investment pouring in, the future of new business in Leigh looks to be very bright indeed.

Duport Associates Ltd is a leading UK company formation agent, operating in the UK for around 15 years. Duport registers around 10,000 new companies each year using its Companies House approved software. The Company Register which is maintained by Companies House contains public information about Limited companies and directors.