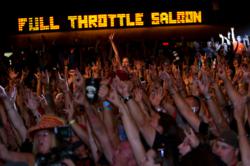 With up to 50,000 patrons a day during the festival, security is a major focus

The level of coverage and the clarity of images we get from the IQinVision cameras allowed us to substantially cut the number of security people we need and that saved us over $30,000 this year. Chris Donahue, Director of Security

IQinVision (http://www.iqeye.com), market leader in high-performance HD megapixel IP cameras, today announced that for the third year in a row Michael Ballard’s Full Throttle Saloon utilized a newly-expanded array of IQeye HD megapixel cameras to keep a close eye on the crowd and provide critical high definition surveillance of the actions of staff and security personnel during the annual Sturgis Motorcycle Rally, 04-11 August.

With upwards of 50,000 visitors daily, the Full Throttle Saloon again was the epicenter of the 2012 Sturgis Motorcycle Rally. The task of managing the massive indoor/outdoor saloon and over 300 on-site staff, millions of dollars in cash, thousands of motorcycles, cars, and property, as well as providing critical information to law enforcement becomes increasingly difficult as the 72nd annual Sturgis Rally continues to grow in popularity.

“The Full Throttle Saloon documentary carried by TruTV provides an up close and personal look at the event and has increased our attendance substantially,” reported Chris Donahue, Director of Security for the Full Throttle Saloon. “Unfortunately, some of the new attendees are not our typical crowd and some of them might be looking for trouble. That means, more than ever before, we focused our attention on security, protection of property, and limitation of liability this year. We needed to be well trained and prepared and we needed to utilize the very best in technology,” added Donahue.

The Full Throttle Saloon has a mix of IQeye megapixel cameras located throughout the buildings and grounds, achieving excellent coverage of where the vast majority of action takes place. Of particular interest are areas where cash is counted, as well as the areas where cash is stored in preparation for bank deposit. In addition watching over cash and assets, Donahue and his surveillance team, located in the property’s security control room, keep a close eye on the crowd to solve trouble before it starts and to direct security forces if problems arise.

Donahue recounted one incident in which a customer punched a vendor’s trailer, putting a sizeable dent in the trailer’s side. “We were there in no time and our sole intention was to obtain identifying information from the subject so the trailer owner and the subject could handle things on a civil level. The subject became increasingly aggressive and asserted that he didn’t punch the trailer. Ironically, before we ever got on scene, we already had the man identified through the use of our high definition network security cameras, so the solution was simple: I told him we had crystal-clear surveillance images showing him punching the trailer and if he didn’t cooperate, he was getting a free ride in a police car. After hearing that, he handed over his ID, we gave that info to the trailer owner, and the incident was resolved without the need for intervention from law enforcement.”

Donahue has instructed his security team to see the network of security cameras as a direct extension of the security function. When there is an incident, he tells them to move the involved parties directly in front of one of the various cameras on the property. “We want to have clear evidence to solve any crimes that happen. The IQeye camera images in high definition also offer our security team with an additional layer of protection. We’re documenting offender’s actions, so in the future we’re protected in a claim of inappropriate response by our security team.”

Case in point: a man was observed outside the main office who appeared to be in distress. Donahue related what happened, “Surveillance officers observed the situation and dispatched security personnel accordingly. Upon arrival, security staff quickly assessed the man’s vitals and indeed the man was clinging to life. Several times his breathing stopped, and the team would later learn the man suffered a stroke. Due to the severity of the situation, various medical interventions were necessary to keep the man alive until paramedics arrived on scene. The entire event was documented on our high resolution cameras, so should any claim arise, the Full Throttle Saloon have clear evidence of exactly what transpired.”

“In addition to protecting our people, we see the IQinVision cameras as our best way to be pro-active in crowd control, but also in doing everything we can to make a memorable and safe experience for each customer. Our customers spend thousands of dollars each year, some coming from outside of the United States to visit the Full Throttle Saloon and take part in this world-famous Sturgis Motorcycle Rally,” added Donahue.

Donahue related another incident in which a man unknowingly was suffering from dehydration and heat exhaustion. “Our surveillance technicians observed someone laying his head on the bar. After zooming in on the image, enhancing the quality, the surveillance technicians determined that the customer was perspiring more than usual. They continued to observe him and confirmed he was in distress. After dispatching ground security forces, the man was rushed by ambulance to Sturgis Medical Center, where he was treated for heat exhaustion and dehydration. The case was severe, but our surveillance technicians were able to quickly dispatch the right teams to the scene to resolve the issue and get the individual the medical attention he needed.”

Again this year, Full Throttle confronted the annual challenge of underage drinking. Unfortunately, a few days before the rally even began, incidents transpired in after under-age drinkers allegedly left the Full Throttle Saloon. These incidents focused a public spotlight on the establishment and something had to be done. “We started a ‘Bounty on Minors’ program,” explained Donahue. “Using the IQinVision cameras, surveillance technicians scanned the crowds and when they spotted someone who looked potentially underage, ground security forces were dispatched to check IDs.”

Donahue continued, “Michael gave the directive to fix this, and we used our technology in a very pro-active, efficient way to show our commitment to solving this problem. The number of minors we caught went up substantially.”

“I’m happy with the result of the ‘Bounty on Minors’ program,” commented Michael Ballard, owner of the Full Throttle Saloon. “When it comes to protecting my property, one of my most valuable assets is my liquor license; that’s your license to play, without it, you can’t even open the doors. Something had to be done and with the technology we have in place, it made doing the job of identifying minors much easier,”

Solving medical problems, untangling vandalism incidents, protecting the hundreds of thousands of dollars of cash each night, catching under-age drinkers, and providing documentation to protect security forces and other staff are just some of things the IQeye megapixel cameras enable Michael Ballard, Chris Donahue, and the Full Throttle staff to do to make the rally week successful. But that’s not all.

“Each year we get better and better in terms of our security organization and performance. This year we did it with 15 fewer security personnel. The level of coverage and the clarity of images we get from the IQinVision cameras have allowed us to substantially cut the number of people we need to manage this week-long event and that saved us over $30,000 this year alone,” said Donahue.

Donahue is already thinking of the 2013 Sturgis Rally. “When it rains, our parking lot gets extremely slippery. Imagine clay soil when it’s compacted, with a sheet of water over the top of it. It’s almost like ice. We had a number of fender benders out there. Next year, we’re going to expand coverage to the parking lot areas so we can protect ourselves from potential liability, and we can solve any problems before they get out of hand.”

Donahue can’t say enough about how surveillance has helped him solve many of his security problems. “Theft used to be a problem, but with the technology provided by IQinVision as well as the television show, incidents have been reduced substantially. I’ve been involved with the Full Throttle Saloon before we deployed IQinVision megapixel cameras, and there is no comparison between 2005 and 2012. We don’t have any theft problems, the cameras most definitely are a huge deterrent.”

About IQinVision
IQinVision has been designing, manufacturing and marketing the IQeye line of HD megapixel IP cameras since 1998. A world leader in IP network camera products, IQinVision is renowned for image quality, stability and reliability in the harshest environments. ONVIF and PSIA compliant, IQeye cameras are integrated with all leading NVRs and are backed by the most comprehensive warranty program in the industry. The company’s products are widely deployed in banking/finance, city surveillance, commercial/industrial, critical infrastructure, education, gaming, government/law enforcement, healthcare, retail and transportation applications. IQinVision is a privately-held corporation headquartered in San Juan Capistrano, California with a regional office in Amsterdam, the Netherlands. For more information: http://www.iqeye.com
For Media Queries:
Bruce J. Doneff
Public Relations
843.476.3022
bruce.doneff(at)iqeye(dot)com