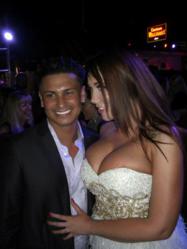 I can't wait to finish my album and hopefully next year, I'll be performing at the MTV Video Music Awards!

The model and aspiring hip hop artist dazzled as she caught the attention of celebrity artists such as Drake, The Wanted, One Direction and DJ Pauly from MTV's Jersey Shore.

"Attending the MTV Music Awards was one of the greatest experiences of my career and running into some of the biggest stars of today was nothing less than a miracle!" Stated Jenna Bentley. "My little niece loves the group One Direction, and snapping a picture with them and sending it to her made me feel so good. I'm totally her most favorite person in the world now!"

Jenna Bentley is currently working on her debut hip hop/dance album which will be slated for release next year.

"A lot of my fans don't know that I am a rapper who writes and produces music. Meeting Drake back stage and talking about music was a dream come true. Drake is such an amazing talent and an inspiration to me. Getting advice from him was more then I could have ever asked for! I can't wait to finish my album and hopefully next year, I'll be performing at the MTV Video Music Awards!"

Jenna Bentley is a multi-talented model/actress/dancer and aspiring hip hop artist. Jenna Bentley was born and raised in Billings, Montana where she founded a small dance school and participated in beauty pageants.

Jenna was discovered for her stunningly beautiful looks at court side during a SUNS vs. Celtics basketball game by a boutique Scottsdale modeling Agency. Ms. Bentley was hesitant at first; but with her background in singing, music, dance, choreography, as well as beauty pageants she decided to take a chance and sign with the agency.

Her career has been a whirlwind success ever since. In just over a year she, was featured as cover model on more than a dozen magazine covers. Jenna Bentley shot the cover of FHM Magazine, and have been featured in Maxim, SI Magazine, and have worked with famed Sports Illustrated photographer Antoine Verlgas.

Jenna Bentley is a triple threat with modeling, acting and hip hop credits under her belt. Ms. Bentley has appeared on hit shows CSI, Law and Order, Entourage and many others. And now, Ms. Bentley is working on her debut hip hop album which she currently writing and producing.

For more information about Jenna Bentley: