Former Intel Corporation CEO Craig Barrett said in an SPIE Newsroom interview Monday that a commitment to investment in optics and photonics research represents “the biggest opportunity” for the U.S.to gain a competitive edge in global markets. Barrett and Secretary of Energy Steven Chu will speak at an event Wednesday in Washington, D.C., launching the new National Research Council report “Optics and Photonics, Essential Technologies for our Nation.” SPIE, the international society for optics and photonics, is a sponsor of the launch event. 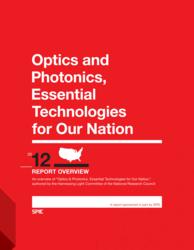 The key issue is singling out photonics and optics as one of the key technologies of the 21st century.

Identifying optics and photonics as key technologies – a direction already being followed by many economies around the world – is a necessary step for the U.S. to take in ensuring that it remains a strong player, former CEO/Chairman of the Board for Intel Corporation Craig Barrett said in an interview Monday with SPIE CEO Eugene Arthurs for the SPIE Newsroom website.

Barrett and Secretary of Energy Steven Chu will be the keynote speakers at an invitation-only briefing Wednesday in Washington, D.C., on the newly released report “Optics and Photonics, Essential Technologies for our Nation,” authored by a committee of the National Research Council. SPIE, the international society for optics and photonics, is a sponsor of the event.

“I think the key issue here is really singling out photonics and optics as one of the key technologies of the 21st century,” Barrett said. “Just about every other major economic power has done the same thing already. Unless the US continues to aggressively pursue research and basic technology development in this area, we’ll fall behind.”

Restoring U.S. investment in basic technology research to levels of 30 or 40 years ago as a percent of GDP “is the biggest opportunity the U.S. has,” Barrett said. This was a key recommendation of both the “Rising Above the Gathering Storm” reports, first published by the National Academies in 2005 and updated in 2010, he noted.

Given that the 21st century is often characterized as the “technology century, the innovation century, or the knowledge century, you can’t expect to be very competitive in that century if you’re continuing to lower your relative investment in those technologies. And that is precisely what the U.S. has been doing,” Barrett said.

Barrett also stressed the need for changes in K-12 and higher education that would raise the competency of U.S. students in STEM (science, technology, education, and mathematics) fields. U.S. scores in science and math have trailed those of many developed and developing nations in recent international assessments.

Optics and photonics applications are necessary in areas such as manufacture and inspection of integrated circuits in electronic devices, displays on smart phones and computing devices, optical fiber that carries the information on the Internet, advanced precision manufacturing and metrology, enhanced defense capabilities, and a plethora of medical diagnostics tools.

New opportunities arising from optics and photonics offer even more potential, areas such as solar power, high-efficiency lighting, genome mapping, medical devices, and new optical capabilities that will be vital for supporting the continued exponential growth of the Internet.

A summary of the “Optics and Photonics, Essential Technologies for our Nation” report and a link to the full document is at http://opticsandphotonics.org.

SPIE is the international society for optics and photonics, a not-for-profit organization founded in 1955 to advance light-based technologies. The Society serves nearly 225,000 constituents from approximately 150 countries, offering conferences, continuing education, books, journals, and a digital library in support of interdisciplinary information exchange, professional growth, and patent precedent. SPIE provided over $2.7 million in support of education and outreach programs in 2011.