State economic development programs, which traditionally target high-tech firms, may be missing 75 percent of high-growth companies; First-ever examination of Inc. 500 companies over 30 years are illustrated in an interactive map and charts at http://www.kauffman.org/inc500 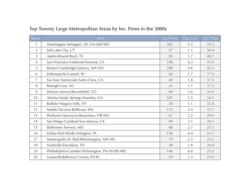 Certain regions of the country continuously produce innovative, high-growth companies that have transcended the economic downturn of the last few years. Surprisingly, those regions include more than the expected locales like Boston and Silicon Valley. “The Ascent of America’s High-Growth Companies,” a report series released today by the Ewing Marion Kauffman Foundation, reveals that high numbers of fast-growing firms are concentrated in unexpected regions and industrial sectors.

“Our analysis of these fast-growing firms shows us that high-growth company founders can come from anywhere,” said Dane Stangler, director of Research and Policy at the Kauffman Foundation. “Their firms can be found throughout the country and, rather than following the conventional expectation that high-growth companies are grouped into a narrow technology category, they represent exceptionally diverse industry segments. These findings offer important lessons for economic development leaders, such as to target firms that are high-growth rather than high-tech.”

The study examined geographic trends of firms included in the 1982 to 2011 Inc. 500 lists to analyze for the first time how regional characteristics are associated with high-achieving companies and innovations. A survey of Inc. 500 founders from 2000 through 2008 also provided insight into the movement of these entrepreneurs from the cities of their alma maters to the locations where they founded their companies.

The first report in the series, “The Ascent of America’s High-Growth Companies: An Analysis of the Geography of Entrepreneurship,” indicates that fast-growing Inc. firms encompass numerous industries beyond the sectors traditionally seen as the reserve of technology-based businesses.

While Silicon Valley, Austin, Texas, and other traditional high-tech hotbeds are well-represented among the cities that house high-growth companies, the research shows that Salt Lake City, Utah; Indianapolis, Ind.; Buffalo, N.Y., and several other Rust Belt icons also have accumulated a significant cache of Inc. 500 firms. The greatest number of Inc. firms is clustered in Washington, D.C., with nearly half of these firms operating in the government services sector.

The study also showed that spending growth in Washington, D.C., since the 1990s – regardless of which party held the White House – has fed the huge complex of fast-growing firms in the D.C. area. The growth of the private sector in the D.C. metro area, among the nation’s fastest-growing metro areas in the past two decades and the first to recover from the housing bubble in early 2009, then, ironically has deep ties to the federal government.

“The Ascent of America’s High-Growth Companies: Founder Mobility,” the second report in Kauffman’s Inc. series, found that 75 percent of company founders started their firms in different metro areas from the ones where they last received a degree. However, 67 percent of the founders remained in the same regions where their alma maters are located.

In addition to these reports, the Kauffman Inc. 500 series also includes:

All reports and maps are available at http://www.kauffman.org/inc500.