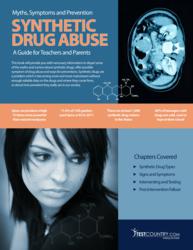 Because they’re not real drugs, children get a false sense of security about trying them, thinking that they are safer than the real thing.

“It’s tough being a parent these days with all the temptations for children to try drugs and these synthetic drugs make it even easier for them to do that,” Serhat Pala, president of TestCountry says. “Because they’re not real drugs, children get a false sense of security about trying them, thinking that they are safer than the real thing. The fact is, they’re not.”

Synthetic marijuana and cocaine have made their way into many stores. Independent organizations have tested the contents used to make these drugs and have discovered hidden chemicals that are not printed on the ingredients and not regulated by governments. Spice, a brand name for one type of synthetic marijuana, is created by manufacturing synthetic cannabinoids that mimic tetrahydrocannabinol, or THC, the active ingredient in marijuana. When these chemical compounds are sprayed onto dried herbs it creates something that looks and acts like natural pot and it can be created to produce a high 15 times more powerful than natural pot.

Synthetic cocaine is known most commonly under the street name “bath salts” and is often made from a chemical compound called methylenedioxy pyrovalerone (MDPV), but also from other amphetamine-like chemicals such as mephedrone and methylone.Bath salts are typically sold in cans and are used in several ways, but generally are taken orally, inhaled or injected.

While the broad chemical composition of bath salts is still largely unknown, the trend of use is rising. By February 2011, Poison Control Centers across America had reported 251 calls regarding synthetic cocaine, in comparison with 236 calls for the entire year of 2010.

“We want parents to know that TestCountry is providing them with the tools necessary to help combat synthetic drug use by their children,” Mr. Pala says. “Together, this informative book and TestCountry’s drug tests specifically designed for detecting synthetic drugs give parents what they need to stop their children from doing these potentially harmful substances. The more people are informed, the better off they are and that’s a big reason why we wrote this book.”

It is available from Amazon.com as a $4.99 Kindle download. You can also get this book about synthetic drug abuse as a free download from TestCountry website.