Staff at Ashburton Cookery School in Devon are celebrating after being voted Cookery School of the Year in the Food and Travel Magazine Reader Awards. 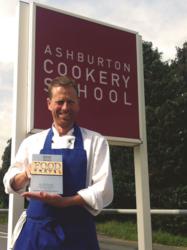 The whole Ashburton team is over the moon to have won the Cookery School of the Year award.

Ashburton Cookery School was presented with the prestigious Cookery School of the Year award at a glittering ceremony in London on Monday September 3.

The cookery school beat off stiff competition from a shortlist of four other leading cookery schools, including Leiths School of Food and Wine to win the top prize which was voted for by the readers of Food and Travel Magazine.

‘More than 20,000 votes were cast by our readers to nominate the best of the best across the food and travel industries and so we have thoroughly deserved winners,’ said Alex Mead, editor of Food and Travel.

The Managing Director of Ashburton Cookery School, Dominic O’Nions says that the school is delighted to win such a prestigious award, "The whole Ashburton team is over the moon to have won especially against such quality competition. We promise our customers an 'Inspirational Cookery Course' and we have a fantastic team here that work incredibly hard to deliver on that. We have developed a loyal following of customers who love cooking with us and we've grown from humble beginnings to become one of the most popular cookery schools in the country seeing around 5000 keen home cooks and aspiring chefs last year. We are really grateful that so many food lovers voted for us and feel honoured to receive such recognition."

Ashburton Cookery School was one of a trio of award winners from Devon which included Gidleigh Park as well as the Devon based wine writer, Susy Atkins.

Note to Editors:
Regularly voted on of the leading cookery schools in the UK, the Ashburton Cookery School offers more than 40 cookery courses aimed at enthusiastic home cooks whether beginners to advanced cooks. Professional chef courses are available at the Ashburton Chefs Academy. The courses are delivered by a team of 7 professional chef tutors in state of the art kitchens at a purpose built facility in Ashburton, on the edge of Dartmoor National Park.