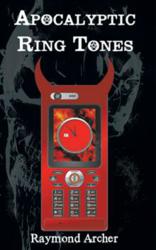 There may be many things leading us down the path of destruction than the Mayan calendar.

In his novel “Apocalyptic Ring Tones” (published by iUniverse), Raymond Archer, who is launching a new marketing campaign for the book, paints a picture of the end of the world which is based on physical clues and international intrigue.

Some people say that the Mayan calendar predicts that the world will end on December 21, 2012. However, in “Apocalyptic Ring Tones” it seems that the end of the world could come even sooner than that. Readers will follow a detective and a scholarly woman on a quest to understand and deal with the clues and implications of an impending disaster that seem to point to a world-ending apocalypse event.

An excerpt from “Apocalyptic Ring Tones”:

“Yes, there is powerful evil. Look around you. The devil has grown stronger. His power is great now. But that only shows more clearly that the end is near. They say that the devil will be the strongest just before the Great War begins, the Apocalypse…and then Armageddon. One day soon he will be overthrown, but now we can only pray to God and be strong.”

Archer hopes readers will enjoy his exploration of the apocalypse from a plausible perspective rather than a religious-based prophecy. He says, "There are a number of books on this theme, but the issue of annihilation may be dealt with from other perspectives. There may be many things leading us down the path of destruction than the Mayan calendar."

About the Author
Raymond Archer has a long publishing career with a background in philosophy. He is a well-traveled author who has written about many of the places he has visited from both a historical and sociological perspective. He is uniquely qualified to write a novel about the end of the world that incorporates many religious and philosophical themes, and he looks at ideas and events, now and forthcoming, from an objective point of view. “Apocalyptic Ring Tones” is his second novel.