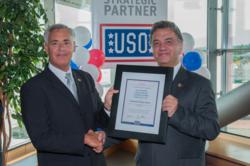 We are so grateful for the support that TKS has continually provided to the USO. It has enabled us to make a significant impact on the lives of those who give so much for our country.

In a ceremony held at their Germany based offices, longtime USO partner TKS Telepost Kabel-Service Kaiserslautern GmbH & Co. KG (TKS) announced they will be doubling their annual commitment to the USO. Their ongoing support of United States active duty service men and women and their families in Europe moves them to join only four other companies at the level of a USO Worldwide Strategic Partner. Worldwide Strategic Partner is a title reserved for supporters who give cash or budget relieving in-kind gifts in the amount of $500,000 annually. TKS is also the only foreign-based corporation to support the USO at the $500,000 level.

“We are so grateful for the support that TKS has continually provided to the USO. It has enabled us to make a significant impact on the lives of those who give so much for our country,” said USO President and CEO Sloan Gibson. “TKS is a valued partner and their increase in commitment affords the USO the opportunity to continue to provide quality programs and services to our nation’s service men and women, military families and recovering wounded, ill and injured troops.”

TKS has been supporting the USO for more than a decade and with this generous pledge they are furthering their commitment to help the USO enhance the lives of our nation’s active duty military personnel and their families, by providing critical telecommunications services to USO Centers in Germany and Italy. Their support includes free calls to the United States, Internet service and a state-of-the-art cable television movie channel systems.

“TKS tailors their services to meet the English speaking needs of NATO and foreign forces,” said Walt Murren, Regional Vice President of USO Europe. “Their support of the American military has been unwaivering and they have truly been a partner to our European operations.”

In addition to providing quality English-language telecommunication products and services to our military, TKS also donates office space to the USO Europe headquarters and hosts an annual Sun and Fun Day for troops and their families at Germany’s USO Kaiserslautern. TKS CEO Herr Karl-Heinz Stahl has been a member of the USO Board of Governors, since 2007.