With yet another tenacious book, Dr. Carolyn LaDelle Bennett presents a case of continued BREAKDOWN in act and ethos and pleads a better way, a better worldview 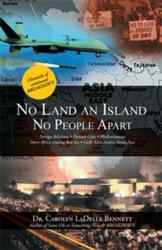 From internationalist and nonpartisan progressive, author of “Same Ole or Something New” and “BREAKDOWN,” comes another thought-provoking work NO LAND AN ISLAND NO PEOPLE APART challenging readers to face the “callously immoral, lawless, relentlessly regressive model in U.S. foreign relations”; and embrace an authentic progressivism.

“This book is unconcerned with political figures per se (or their parties),” Bennett says, “but rather with a malignant system maintained by a parade of tentacled regimes whose official (elected) base of operation begins in the capital of the United States, a system that is seemingly endorsed by the people of the United States.” The author maintains that the United States has created and entrenched a narrow worldview, espousing an attitude that all land and peoples belong to America to use and abuse, to pillage and plunder.

In this work, Dr. Carolyn LaDelle Bennett takes a second look at U.S. relations with Afghanistan and Pakistan, Iran and Iraq, Bahrain and Yemen, Libya and Somalia; and sees a continuing BREAKDOWN that worsens in act and consequence. She then presents her own ideas and worldview; and a challenge to embrace a nonviolent, transformative, inclusive progressivism imbued with a sense of global society, a sensibility that inspires constructive, continuous forward movement.

Bold and daring, NO LAND AN ISLAND NO PEOPLE APART is an educator’s guide, a philosopher’s critique, a news writer’s eye, an internationalist’s sensibility chronicling U.S. foreign relations violence and the human costs—East Africa crossing the Red Sea and Gulf of Aden into Persia, the Middle East, South Central Asia.

About the Author
Dr. Carolyn L. Bennett is credentialed in education and print journalism and public affairs. A lifelong American writer and writer/activist (former academic and staffer with the U.S. government in Washington), her work concerns itself with news and current affairs, historical contexts and ideas particularly related to acts and consequences of U.S. foreign relations, geopolitics, human rights, war and peace, violence and nonviolence. Bennett is an internationalist and nonpartisan progressive personally concerned with society and the common good. An educator at heart, her career began with U.S. Peace Corps teaching in Sierra Leone, West Africa. Since then, she has authored several books and numerous current affairs articles; her most recent writings are posted at Bennett’s Study: http://todaysinsightnews.blogspot.com/. She lives in the town of Brighton at the edge of New York’s Finger Lakes along the Erie Canal looking west-northwest to Niagara Falls and can be reached via email at authorswork@gmail.com or cwriter85@frontiernet.net.