New book explores one man’s vision of the afterlife 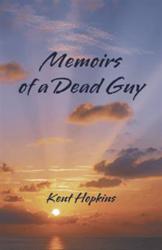 Everything you do, all the words you ever speak, all have an effect on others, both good and bad, Give it some thought … the good comes back to you, as well as the harm done others.

Kent Hopkins invites readers on a journey filled with retrospection and introspection in his thought-provoking new book, “Memoirs of a Dead Guy” (published by iUniverse).

“How many have wondered what happens to us when we cash out?” Hopkins asks. “All of us do in time. How many have even attempted to speculate in writing, given such a topic?”

In “Memoirs of a Dead Guy,” Hopkins sets out to do his own exploration, and details the experiences he had with a being he indentifies as his guardian angel. This guardian angel visits a fictional Hopkins as he’s laying in a bed preparing to die from cancer. He’s reminiscing about his time on Earth and realizes that he doesn’t regret a single moment.

An excerpt from “Memoirs of a Dead Guy”:

“There is a message here, one I wish to share. Things aren’t what they seem. We’ve been blinded by the fearful side of us, seeking nothing less than absolute domination and control of our environment and each other. It was written that those who intend to lead end up at the back of the bus and those who would control end up seeking to explain themselves to a far greater power.”

“Everything you do, all the words you ever speak, all have an effect on others, both good and bad,” Hopkins writes. “Give it some thought … the good comes back to you, as well as the harm done others.”

About the Author
Kent Hopkins is a 60-year-old widower living in a small town in central California with nine cats and one dog. His interests include writing, target shooting and gardening. This is his first published book.

iUniverse, an Author Solutions, Inc. self-publishing imprint, is the leading book marketing, editorial services, and supported self-publishing provider. iUniverse has a strategic alliance with Indigo Books & Music, Inc. in Canada, and titles accepted into the iUniverse Rising Star program are featured in a special collection on BarnesandNoble.com. iUniverse recognizes excellence in book publishing through the Star, Reader’s Choice, Rising Star and Editor’s Choice designations—self-publishing’s only such awards program. Headquartered in Bloomington, Indiana, iUniverse also operates offices in Indianapolis. For more information or to publish a book, please visit iuniverse.com or call 1-800-AUTHORS. For the latest, follow @iuniversebooks on Twitter.
###