Blackpool has seen a significant increase in net growth of new companies so far this year, according to the latest Duport Business Confidence Report. 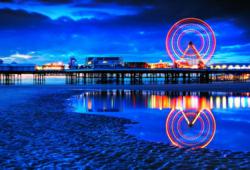 The figures we are seeing for Blackpool this year are very impressive, and show that the economy of the town is holding up in the face of the recession.

Blackpool: The second quarter of this year saw the highest ever net growth in number of new companies in Blackpool. There was a net growth of 271 companies, beating any other second quarter on record for the town and representing a 16.3% rise when compared with the same period in 2011.

The first half of the year also yielded impressive figures for the town, with 41% higher net growth in new companies than the previous first half year.

The economy of Blackpool is based around tourism. The area attracts 17 million visitors every year, generating £545 million pounds of expenditure. However, the local council are working to diversify the economic base by attracting investors to the area in order to make the town less dependent on tourism for its income.

Figures for UK company share would suggest that more businesses are indeed choosing to locate in Blackpool. The Duport Business Confidence Report states that between 2008 and 2012, the UK company share during the first half of the year has risen from 0.2% to 0.4%.

“The figures we are seeing for Blackpool this year are very impressive, and show that the economy of the town is holding up in the face of the recession.

“With such a high footfall from tourism, there should be no shortage of customers for business start-ups, particularly those in the service sector.”

With so many new companies opening up and a council committed to attracting further investment, Blackpool is a town that looks like it’s on the up.

Further information can be found at http://www.duport.co.uk/blackpool.

Duport Business Confidence Reports are generated and released by Duport Associates Ltd. The data contained in these reports is assimilated and analysed by Duport using public record data from sources including Companies House, Office for National Statistics and Ordnance Survey. Duport Associates Ltd is a leading UK company formation agent, established in
1997 and registering around 10,000 new companies each year through its Companies
House approved software.