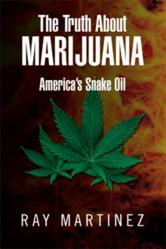 There are people who are misled about the genuine use of marijuana for medicinal use. People who are using the drug for legitimate reasons are much sounder in their reasoning and belief that it is helping them. Whether the drug is acting as a placebo for them or not, most people really don’t know. However, the abusers’ reasoning becomes irrational and very vague.

The Truth About Marijuana written by Ray Martinez exposes everything to the public what they really need to know regarding the truth about marijuana and how it should not be allowed to be legalized for it will become a subject for abuse. Many years ago, people would sell bottles of drinks that were supposed to cure everything, better known as snake oil. Today, society is faced with the twenty-first-century “snake oil” that proponents wants the public to believe that marijuana cures everything from minor pains to curing cancer. Snake oil never lives up to the sellers’ hype. It was just a common phrase used by people years ago, and even today, to refer to products that don’t really promote healing in the long run.

Martinez thinks that even though there are people who really need marijuana for medicinal purposes, others use it as a recreational drug and as a social lubricant. He believes that there must be a gatekeeper of all medicines and doctors shouldn’t be allowed to write notes or prescriptions for medicine that is not approved by the existing gatekeeper which is the Food and Drug Administration (FDA) and sold through a pharmacy.

The Truth About Marijuana is a breath of fresh air, clearing the fog of misinformation in much of what the public hear about marijuana. It provides the facts that counter the incessant barrage of marijuana propaganda being distributed by lobbyists in Washington DC (Marijuana Policy Project). This book is a must-read for educators, family therapists, and families. It is especially an important reading material for families who are in marijuana-battleground areas and in which the proponents are well funded, have everything to gain financially, and will make arguments that, on the surface, can sound convincing. This book will debunk all these myths as it arm the public with the needed information to prevent attacks on family’s true health and wellness.
For more information on this book, interested parties may log on to http://www.Xlibris.com.

About the Author
Ray Martinez is dedicated to the Fort Collins, Colorado community in which he grew up and has over 30 years experience in public service. He began his career in the Fort Collins’ Police Department in 1974 and retired in 1996. Mr. Martinez was the lead investigator in an international terrorist investigation that became the subject of two published books: Death Merchant by Joseph Goulden and Man Hunt by Peter Maas. He has also authored and published seven of his own books. Ray hosts a weekly radio talk show with KFKA Radio in Greeley, CO, and he still presides on several boards nationally, state and locally. Mayor Martinez was elected for 3 terms, 1999, 2001, and 2003—he left office in April 2005 because of term limitations.