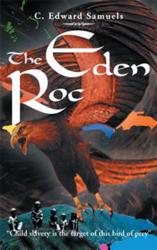 The Garden of Eden had its snake: it preyed upon the weakness of temptation. Ancient Arabic mythology had its Roc—“a gigantic bird of prey.” The Garden of Eden we call Puerto Rico is now visited by the Eden Roc—a monster of greed and perversion that is preying upon children. C. Edward Samuels lets his hero Keith Robert’s group enter the world of young slave prostitutes and the pornography cartels who feed on them.

As despicable, appalling, abysmal, and mind-numbing as it is, children are abducted forcefully off the street every day. They are enticed into capture, sold by parents, traded, won in poker games. There is no end to the practice or the methodology used in procuring juvenile slaves. The vast majority are forced into prostitution. They are, more often than not, injected with habit-forming narcotics to ensure their cooperation. The perpetrators of this abomination are who Keith Robert & Co. is chasing down. The masters and operators of this vast and deadly empire have made the jewel-like beauty of the Caribbean Islands their wretched playground. In paradise, the ballet of violence is danced and Keith Robert must become the dance master to call down the curtains of this vile cancer.

Written in a powerfully passionate text, Keith narrates this tale like the career law enforcement officer that the author was in real life. There is no lack of action, a heroic kind that mows down bad guys with great righteousness and anger. So, too, will the reader be convinced of the necessity of Samuels’ realistic rhetoric and action oriented approach. The Eden Roc is a grand crime-fighting adventure with compelling actualism graphically depicted.

About the Author
"My wife accuses me of exaggerating. I think that I expand - a little. One could even say that I tend to expound - occasionally. But exaggerate? Respectfully I submit, that may be something of an exaggeration - always!" So writes C. Edward Samuels on his writing. The “C” in the nom-de-guerre stands for Colonel, “E” for Edward, the author’s adopted father, and “Samuel” is for the two Samuels the author admires most, his real father and his brother.

The author is 65 years old, married to a lovely Sicilian lady. Together, they have seven marvelous children, fourteen beautiful and talented grandchildren and one recent addition – a great grandchild. In an action-filled professional life, he served the United States Coast Guard as a Special Agent, was a police officer and deputy sheriff and retired as Chief of Police for a large federal agency. He was a certified polygraph examiner and tested for national intelligence organizations. In a thirty year career he gained a realistic viewpoint of our criminal justice system. Col. Samuels is also a certified PADI Master Instructor and ITC Director emeritus.
He earned a BS and an MS in psychology.