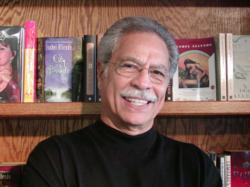 Chapman University has joined with Orange County cultural leader Ruebén Martínez as a partner in his bookstore, Librería Martínez, located in downtown Santa Ana. The bookstore will become a nonprofit community educational initiative under the university’s oversight. With Ruebén Martínez’s guidance and collaborative leadership, Chapman University has assumed responsibility for the bookstore’s operations, and will provide an enhanced business plan for the store’s retail operation as well as opportunities for donor support. All proceeds from retail sales will be re-invested in the nonprofit educational initiative.

Librería Martínez de Chapman University, as the store will now be known, will offer partnered programs with the university that will include expanded literacy tutoring staffed by Chapman education students and faculty members, counseling programs to help Santa Ana students navigate the education system from K-12 through college, reading clubs, monthly book discussions, author signings and more. Chapman will also revamp the store’s façade with a bold new redesign that includes eye-catching tilework and signage.

A Grand Re-Opening of the store is scheduled for October 27, with more information to be released closer to that date. Librería Martínez de Chapman University is located at 216 N. Broadway in Santa Ana, Calif.

“The establishment of Librería Martinez de Chapman University will provide a base from which Chapman faculty and students will enhance literary and learning opportunities for Santa Ana residents and also learn from the residents,” said Don Cardinal, Ph.D., dean of Chapman’s College of Educational Studies. “Our students learn about the community from those who live in the community, not just from books and professors. Those who reside in the community will inform us of their needs, rather than us telling them what they should need. This is democratic civic engagement: mutual benefit derived from mutual respect toward the goal of community enhancement. Chapman University is proud to partner with one of Orange County’s true cultural treasures.”

Santa Ana’s Librería Martínez was founded and operated by Ruebén Martínez, one of Orange County’s most respected cultural leaders. Martínez was the recipient of a MacArthur Foundation Fellowship (popularly known as “the genius grant”) in 2004, and currently serves as a Presidential Fellow at Chapman University. He was granted an Honorary Doctorate in Humane Letters by Chapman University in 2011.

In the late 1970s, Martínez operated a barbershop in Santa Ana, serving the community for more than 20 years as his shop became a gathering place not only for the Latino community but also for many of the movers and shakers of Orange County. Martínez became a cultural and political activist, and in 1993, when he realized that his predominantly Spanish-speaking clientele did not have a bookstore to meet their needs, he added a small collection of books to his barbershop. The number of books soon overwhelmed his shop, and Librería Martínez Books and Art Gallery, along with Libros Para Niños, a children’s bookstore, were born. Many world-famous authors, including Isabel Allende, Sandra Cisneros, Jorge Ramos, Gary Soto and Rudolfo Anaya have visited and signed books at the store.

Ruebén Martínez is well known as a champion of literacy for all, and in his current role as Presidential Fellow at Chapman, he acts as a community ambassador, reaching out to first-generation college students. Chapman’s Chancellor Daniele Struppa has remarked “Ruebén Martínez is proof that intellectual curiosity and a love of reading can completely transform a life, and his contagious enthusiasm in spreading the word about reading to young people is an inspiration to us all. He demonstrates every day that one person can be a dynamic catalyst for change.”

Dean Cardinal emphasized that Santa Ana has the lowest per-capita income ($16,891) and the lowest graduation rate in Orange County. More than 80 percent of Santa Ana residents are of Latino descent, and the majority of residents work in the service industries, a field characterized by low wages. “The poor economy has necessitated closure of local Santa Ana libraries,” Cardinal said, “leaving families with limited access to books and learning opportunities. But Santa Ana remains vibrant, and this new partnership has the potential to become a principal hub for educational resources, community programs and cultural activities. By linking Chapman University to a community resource with deep historic regional roots, we hope that Librería Martínez de Chapman University becomes a catalyst for significant, positive change for the residents of Santa Ana.”

Initially, the following programs will serve the community, with the addition of more programs planned to launch later:

1.    Literacy - This program aims to foster a love of reading for preschool school children by establishing a reading time where children and their parents can enjoy story time in English and Spanish. Chapman faculty and students will be involved in group sessions as well as one-on-one and “mommy and me”- type readings. In the future, plans also include offering reading and literacy tutoring, as well as math and financial literacy for children, teens and adults.

2.    Parent Groups - Padres Unidos, a community-based parent education group affiliated with Chapman University, will be holding courses of study on parent development at Libreria Martínez. These courses are aimed at strengthening the family, supporting school children and building stronger and safer communities.

3.    Teens - Chapman will also offer workshops and counseling on various educational topics to help teens navigate the secondary educational system as well as providing orientation and support for them as they pursue higher educational opportunities. This program will be directed at both male and female teens, who may have separate and distinct needs in finding ways to be successful in school.

4.    Literature, Reading and Arts Clubs – Librería Martínez will also offer monthly book discussions, book signings, author and artist presentations. These will aim to cultivate the love of reading and the arts, and to ensure children and adults have access to quality literary and educational material in their native language as they develop English competencies.

More information will soon be available on the Librería Martínez de Chapman University website: https://www.chapman.edu/ces/libreria-martinez.aspx. Details on the bookstore’s Grand Re-Opening on October 27 will be released soon.

ABOUT CHAPMAN UNIVERSITY:
Consistently ranked among the top universities in the West, Chapman University provides a uniquely personalized and interdisciplinary educational experience to highly qualified students. Our programs encourage innovation, creativity and collaboration, and focus on developing global citizen-leaders who are distinctively prepared to improve their community and their world. For more information, visit http://www.chapman.edu
Follow us on Facebook: Chapman University Facebook
On Twitter: @ChapmanU
On YouTube: Chapman University YouTube Channel