Author Michael Mosley Shares His Exhilarating Adventures around the World 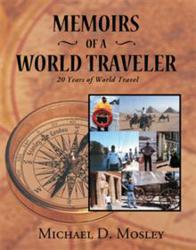 Author Michael Mosley grew up in a land-locked state and did not see the ocean until his twenty-second birthday. It was not until in 1994 when he took his first trip to London that Mosley, like what Mark Twain wrote, caught the trade winds in his sail and dared to explore the world laid before him. In Memoirs of a World Traveler, the reader will be all at once engaged, fascinated and inspired to grab a map and embrace the road.

After his solo trip in London, Mosley spent the next 19 years traveling every summer to all five Olympic continents. Through his riveting narratives and splendidly taken photographs, Mosley transports readers to his adventures – from climbing into the Trojan horse in Turkey to riding a camel at the Pyramids outside Cairo Egypt, from cruising the Nile to conquering the Great Wall of China, and taking the ferry from Mykonos to Santorini Greece. These places are just a slice of the world that is Mosley’s playground.

Memoirs of a World Traveler is patterned chronologically based on Mosley’s travel timeline -- from his first trip planning in 1993 to his swan song trip to China in April of 2012. “This is a self- help book as well as book of memoirs. This book tells the story of a middle aged high school counselor who began to travel the world, fell in love with travel and continued on for 20 more years,” Mosley wrote. With his travel tips and encouragement, readers are on their way to seeing the world for less. “Even those with modest incomes will be able to afford to travel,” the author added.

Mosley writes with wit and elegance in this charming yet very practical memoir. The reader will most likely have their bags packed the soonest for distant lands and vast oceans in Memoirs of a World Traveler.

About the Author
Michael D. Mosley is a 63-year-old, retired high school counselor and professor from Atlanta, Georgia, who holds a Bachelor of Science degree in Education and a Master of Arts degree in Counseling and Health. Mosley grew up on a tobacco farm in Kentucky. He has recently concluded a 37-year career in Education, having worked at every level from kindergarten to university. Mosley is a father and proud grandfather of two.