In a recent Tellwut online survey, 60% of over 1,500 voters felt that Gen Y’s were overly entitled and narcissistic; unhealthy traits labeling this generation. The survey looks to the causes of these traits and the longer view of Gen Y’s as future leaders of society. 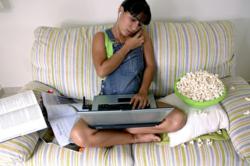 Gen Y’s are people born between 1982 and the first few years of the 21st century. This generation has been accused of being more entitled, selfish and egotistical than their parents or any previous generation. A Tellwut online survey of over 1,500 voters asked if they considered this feeling of entitlement to be a bad thing. The survey found that 60% of respondents felt that it was unhealthy, 18% had no problem with the idea and 15% were unsure. Only 7% disagreed with the premise altogether.

The root cause of the claimed entitlement and narcissism of Gen Y's pointed to the parents of Gen Y's. Parenting that pushes self-worth and limits consequences for mistakes and failure and treatment of children as equals from an early age accounted for 38% of respondents’ reasons for supporting the perception of entitlement. Increased wealth and the aspirations encouraged by reality media were also cited as causes by 24% of those polled. Only 5% of voters rejected the notion of sense of entitlement outright.

Comments by Tellwut voters revealed a degree of resentment about the perceived ease with which Gen Y's deal with its lot. Gen Y's were very vocal in their feelings that they were facing much more difficult times such as higher youth unemployment, crippling debt and an uncertain future; an unwelcome legacy of their parents and grandparents.

In terms of the longer view, 34% of respondents felt that Gen Y’s are more entrepreneurial due to their lack of fear of experimentation, brought about by globalization and technology, along with Gen Y’s ability to embrace change. However, 38% felt that Gen Y’s general lack of maturity and sense of responsibility would lead to rash decisions and mistakes.

Suffice to say each generation is criticized by generations past; as well, each generation voices concern about the legacy they are leaving behind. Gen Y’s will be our next leaders in a very challenging and exciting world. Let’s not forget John F Kennedy’s words; “We have the power to make this the best generation of mankind in the history of the world or to make it the last.” It is the older generation’s responsibility not just to nurture but to adapt to and harness the unique skills Gen Y’s have to offer.