Trade in values for the iPhone 4 dropped to the lowest level after the iPhone 5 was released in stores, according to a study from TechBargains.com 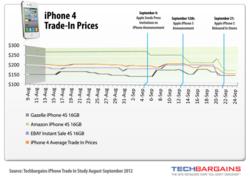 The price of older models typically decline steadily when new models are announced, but in the case of the iPhone 4, the price actually rose on the day of the announcement.

TechBargains.com, a leading deal aggregation website for electronic products, tracked and compared iPhone 4 trade in values from August 9 through September 24 from Amazon, eBay Instant Sale and Gazelle. The data reveals consumers received the highest trade in value for the iPhone 4 the day of Apple’s iPhone 5 announcement on September 12 and within the four days before the announcement. Trade-in prices were also high three weeks prior to the announcement amidst mounting rumors of Apple’s new iPhone from August 16-22. Prices were lowest the days after the iPhone 5 was released in stores, September 22-24, when average resale values dropped by over 4% or $7 in a day. Further, the data indicated that average trade in prices for the iPhone 4 also fell about 11% or $21 two days following Apple’s official announcement, September 14-15.

“The price of older models typically decline steadily when new models are announced, but in the case of the iPhone 4, the price actually rose on the day of the announcement,” said Yung Trang, editor-in-chief and president of TechBargains.com. “We believe this occurred because vendors like Gazelle were trying to capture a greater share of iPhone 4 trade-ins.”

According to data tracked by TechBargains.com, consumers can receive between $140 to $280 for an iPhone 4 depending upon the time of the trade in relative to Apple’s announcement and the condition of the device.

TechBargains.com tracked resale prices for the black iPhone 4 16GB AT&T in ‘good’ condition for Gazelle and eBay Instant Sale and ‘like new’ condition for Amazon from August 9-September 24. Values are determined by vendors based on various factors including, but not limited to, condition of the iPhone, color, the mobile carrier and if the charger is included. Graphics illustrating the fluctuation of resale prices by vendor and date for both the iPhone 4 and iPhone 4S can be found here.

About TechBargains
TechBargains is a deal aggregation website that combines intelligent curation with real-time price-value discovery algorithms. TechBargains uses this technology to highlight the best deals and coupon codes on the internet each day. TechBargains is a division of Exponential Interactive (http://www.exponential.com), a global provider of advertising intelligence and digital media solutions to brand advertisers headquartered in Emeryville, California that offers solutions in 26 countries worldwide. For more information visit http://www.techbargains.com.